by
Kim Ho
in
Lifestyle

Recently, a limited number of bars, pubs, nightclubs, discotheques and karaoke lounges re-opened with COVID-19 safety measures in place under a pilot programme. Latest YouGov data looks at what Singaporeans think of nightclubs re-opening and of nightlife as a whole.

After eight months of remaining shut, the Ministry of Trade and Industry (MTI) and the Ministry of Home Affairs (MHA) announced that certain nightlife venues would be able to re-open. While three in ten (29%) of Singaporeans agree with this decision, the other three in ten (29%) disagree. The remaining two in five (41%) are undecided. Younger Singaporeans (aged 18 to 34) are the most likely to agree with the decision to re-open, while older Singaporeans (aged 55 and above) are the least likely (35% vs. 25%). 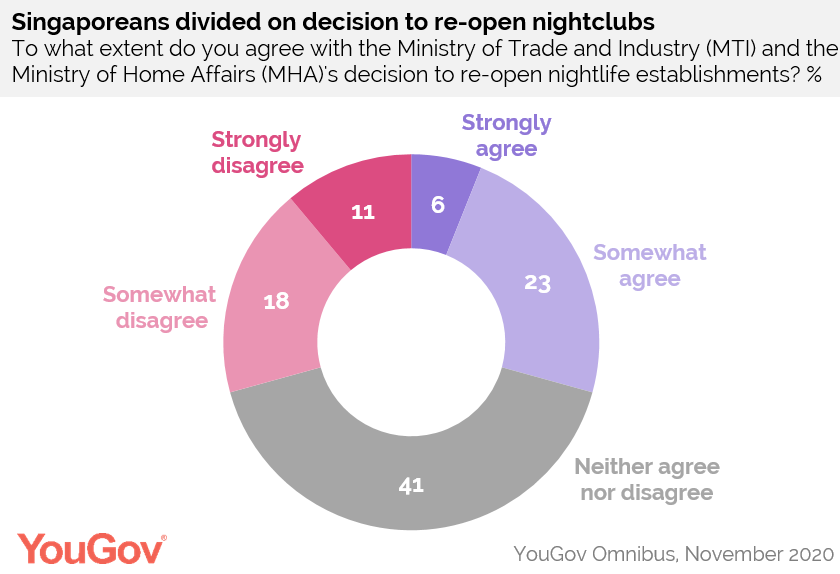 Amongst club-goers, the main reason to go clubbing is to spend time with friends (64%). To enjoy the music and for a celebration and party (37%) come in joint second, followed by to drink alcohol (36%), to dance (19%) and to chat up people (14%). A small percentage (7%) say they go clubbing because there are no other places to go at night.

The re-opening of these venues sees some very stringent measures in place. For example, all customers must wear masks at all times even when on the dancefloor or while singing. No alcohol can be sold, served or consumed after 10:30pm and all customers must be tested negative for COVID-19 24 hours prior to entering the establishment. With these measures in mind, three in five (63%) of Singaporeans are uninterested in returning to nightlife venues. A quarter (25%) have no opinion, and slightly over one in ten (13%) are keen. However, amongst younger Singaporeans (aged 18 to 34), this number doubles, with one in five (19%) interested in returning to nightlife venues, even with stringent measures in place. 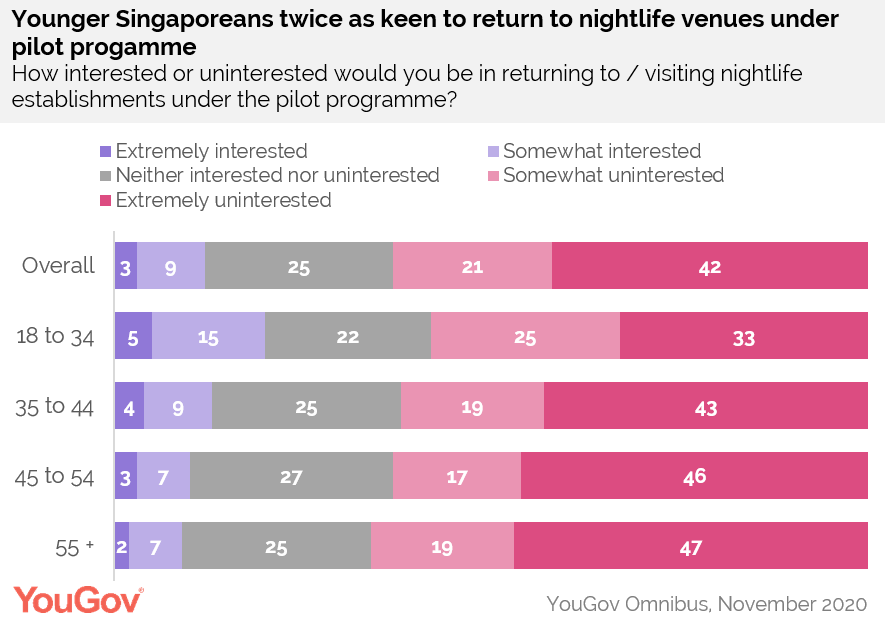 Singaporeans are not only divided on whether nightlife venues should re-open, they also appear divided on their attitudes towards nightlife venues as a whole. Half (48%) agree that going to bars, clubs and karaoke lounges help people relieve stress, and almost half (45%) agree that the nightlife industry is an important part of Singapore's economy. However, a similar number (44%) also believe that nightlife establishments do more harm than good. The majority (79%) agrees that keeping citizens safe in a pandemic is more important than allowing for nightlife activities.

***Results based on 1,068 Singaporeans surveyed on YouGov Omnibus