One in five Singaporeans wear a size XL or larger

The plus-sized fashion industry is on the rise, with a rising number of retailers now catering to the plus-sized. New YouGov research looks at attitudes towards this, and whether such a demand exists in Singapore.

Plus-size clothing is clothing proportioned specifically for people whose bodies are larger than the average person's. Most major fashion retailers do not make clothing for people smaller than an XS or larger than an XL. However, about one in five (18%) Singaporeans currently wear a size XL or larger, while only 3% wear a size XS or smaller. The majority (79%) wear between a size S and L.

Three in five (60%) of Singaporeans are able to buy from most, or if not, all major fashion retailers, as they cater to their current size. Those who wear a size S are the most likely to find clothes in their size, with seven in ten (72%) able to do so. One in five (20%) feel that some clothing companies cater to their size, and the remaining one in five (20%) feel that few or none do. Amongst those are a size XL or larger, this number jumps to two in five (41%).

Overall, most (87%) agree that clothing companies should cater to a size larger than XL. A smaller amount (72%) think the same can be said for those smaller than a size XS. As a whole, most people feel positively about plus-size fashion, particularly women. Women are more likely to agree that larger sized individuals deserve to feel attractive than men (81% vs. 66%). Women are also more likely to think that the fashion industry does not pay enough attention to larger sized people than men (69% vs. 57%). 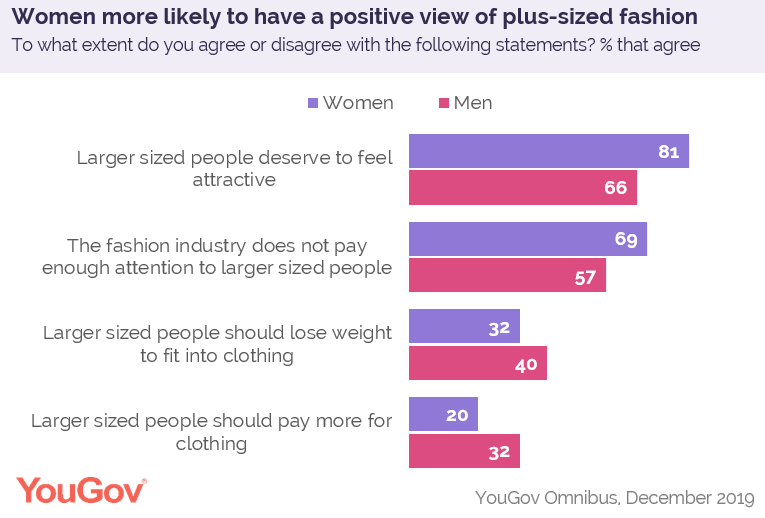 Jake Gammon, Head of Omnibus APAC at YouGov Omnibus commented: “The fashion industry is constantly evolving, and in recent years this has grown to include plus-size fashion. While the plus-size fashion industry is still relatively new in Singapore, it is clear that a significant proportion of the population has a demand for it, and the majority are open to the idea as a whole.”

***Results based on 1,055 Singaporeans surveyed by YouGov Omnibus