Latest rankings dominated by local brands, with technology and retail being the most-represented sectors

E-commerce platform Shopee has emerged as the most talked about brand among Singaporeans in YouGov’s Buzz Rankings 2021 (43.5), up from fourth last year. The e-commerce enterprise is one of six local brands that made it to the top ten buzziest brands of the year.

YouGov BrandIndex measures the public’s perception of brands on a daily basis across a range of measures. The annual rankings are compiled using Buzz scores from across all 52 weeks of last year. Buzz scores measure whether people have heard anything good or bad about a brand during the previous two weeks. 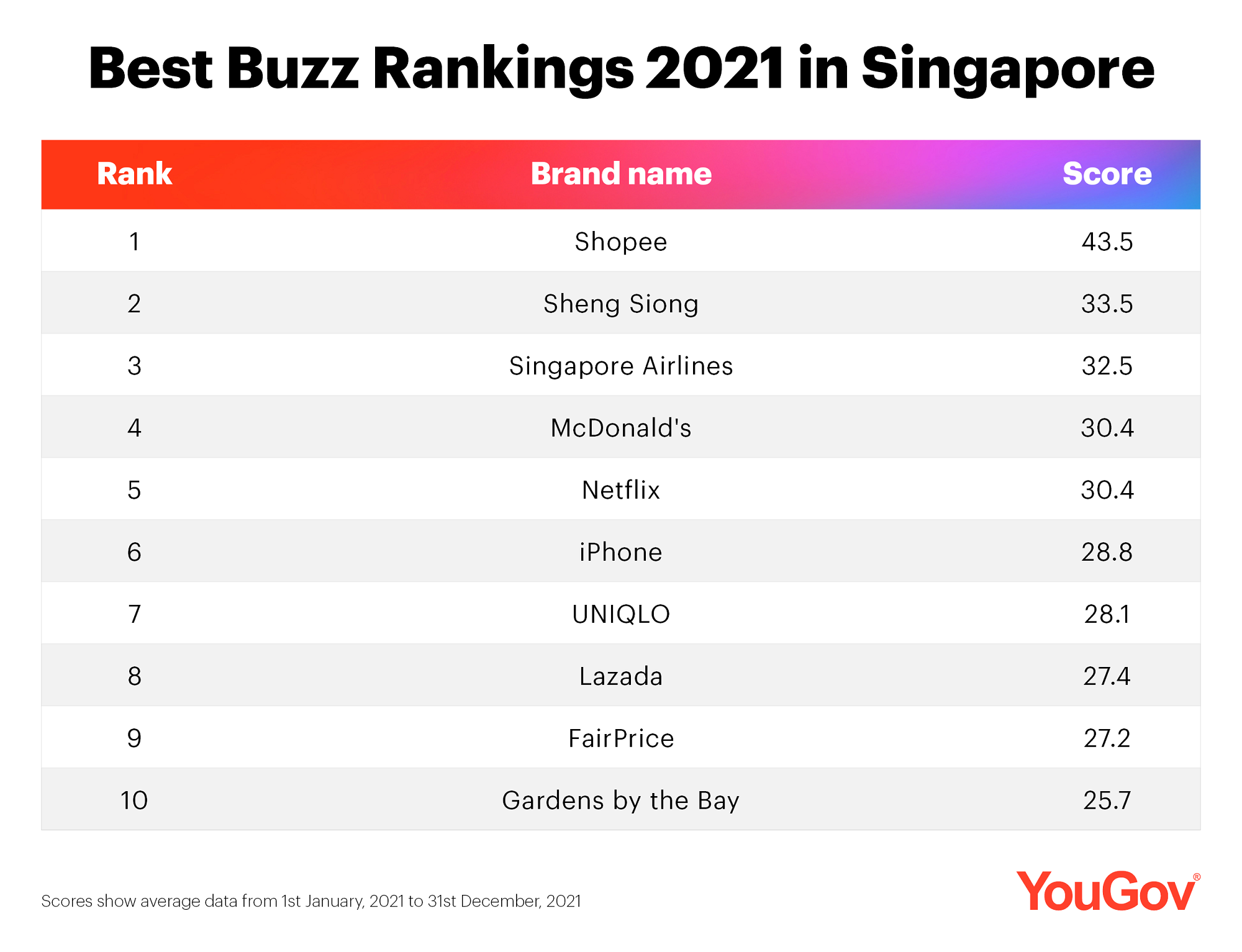 Along with Shopee, fellow e-commerce platform Lazada came in eighth (27.4), in its debut on Singapore’s rankings.

McDonald’s was ranked fourth this year (30.4), just one spot down from its previous ranking, while UNIQLO made a return to the rankings since it was last featured in 2019, coming in seventh place (28.1).

Apple’s iPhone maintained its sixth-place rank (28.8), while Netflix climbed up three places to round off top five.

Retailers were another group that fared well, with four of the top ten brands being from the sector. Notably, Sheng Siong climbed seven places to come in second place (33.5), while FairPrice conversely fell from second to ninth place (27.2) in the 2021 rankings.

Travel and tourism also appears to be making a comeback, with Singapore Airlines moving up four ranks to clinch third place (32.5), and horticultural destination Gardens by the Bay (25.7) debuting in tenth place.

YouGov BrandIndex has also released the ten “most improved” brands of the past year. Along with being the top ranked brand this year, Shopee is also the most improved brand of the year, with an improved score of +11.7 points. Lazada similarly made an appearance on the improvers ranking, coming in seventh place (+3.8 points). 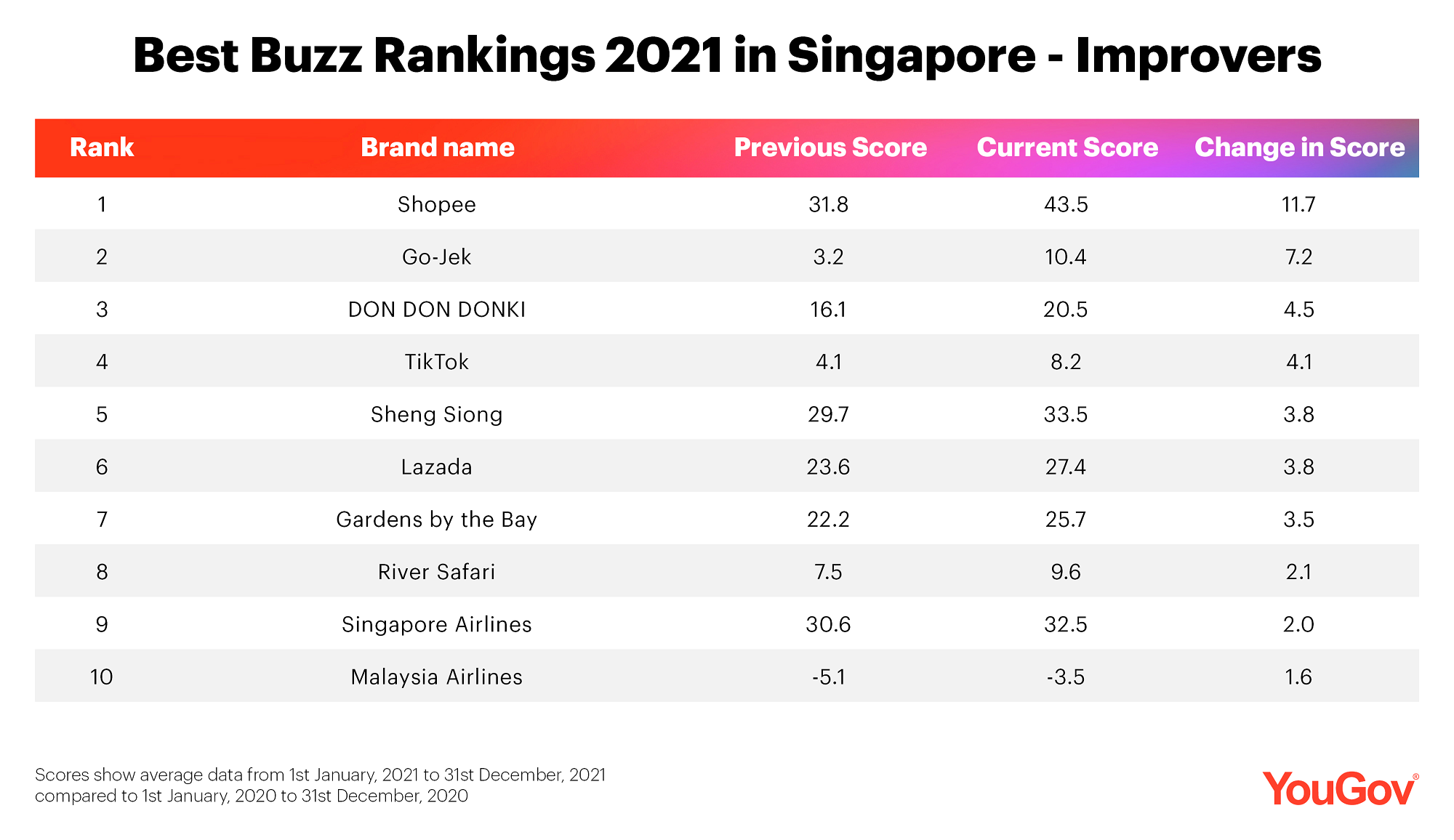 Indonesia-based multi-service platform Go-Jek was the second-most improved brand (with a change in score of +7.2), as could be expected given their rapid expansion in Singapore and plans to introduce more services. This was followed by DON DON DONKI, which opened its twelfth outlet locally earlier this year.

Chinese video-focused social networking brand TikTok and retailer Sheng Siong were fourth and fifth most improved, with changes in scores of +4.1 and +3.8, respectively.

The rest of the improvers list constituted travel and tourism brands, which again made noteworthy improvements. Attractions Gardens by the Bay (+3.5 points) and River Safari (+2.1 points) – now renamed River Wonders – ranked as the seventh and eighth most improved brands respectively, while Airline carriers Singapore Airlines (+2.0) and Malaysia Airlines (1.6) also made notable progress, ranked as ninth and tenth most improved.

The brands in YouGov Best Buzz Rankings 2021 were ranked based on the Buzz score, which asks respondents, “If you've heard anything about the brand in the last two weeks, through advertising, news or word of mouth, was it positive or negative?” Scores are net scores, calculated by subtracting the percentage of negative responses from the percentage of positive responses for each brand.

The Buzz Rankings chart shows the brands with the highest average Buzz scores between January 1st and December 31st, 2021. The Buzz Improvers chart ranks the brands with the highest increase in Buzz comparing scores in years 2020 and 2021, to be included in the Buzz Improvers list, the variance must be positive. Both scores are online representative.

All Buzz scores listed have been rounded to a single decimal place; however, we have used additional precision to assign ranks.