When it comes to the type of influencers followed, data suggests that just under one in ten (9%) consumers across all 17 markets follow gaming influencers. Among the surveyed markets, China and Indonesia have the highest penetrations of gaming influencer followers, representing a fifth of the population in both markets.

Globally, gaming influencers are the most popular type of influencer followed by males aged 18-34 years, with almost a quarter (23%) of all adults in this demographic segment following gaming personalities.

In 12 out of the 17 countries surveyed, the proportion of men aged 18-34 following gaming influencers tops the list of influencer types followed. In addition, gaming influencers rank in the top three in 15 out of 17 international markets, notably in the APAC region. 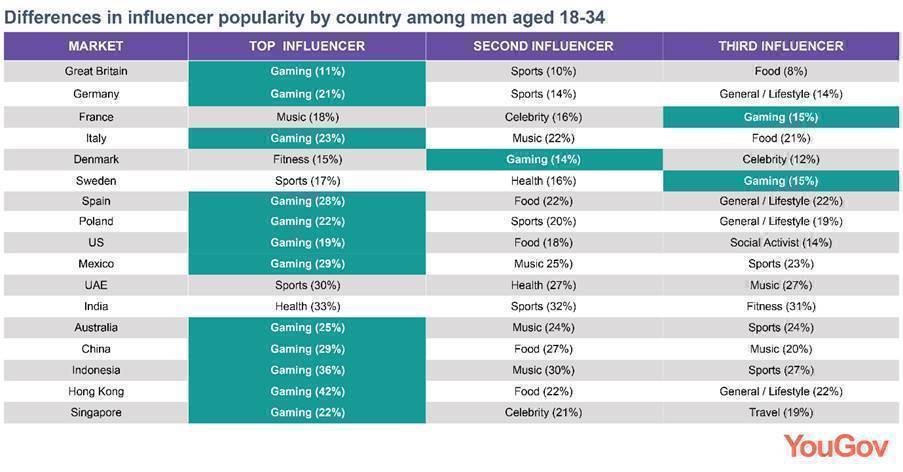 When we compare the proportion of men aged 18-34 years to the total populations in each country, penetrations of gaming influencer followers increase across all markets with the highest numbers reported from Asian markets such as Hong Kong (42%) and Indonesia (36%).

When it comes to gaming frequency, YouGov data shows 68% of adults across the 17 international markets surveyed currently game at least once a week. The relationship between gaming frequency, and the size of the influencer sector is clear when we explore the amount of time spent gaming. The global proportion of those following gaming influencers increases from 9% overall to 15% among active gamers (playing video games 1+ hours per week), and to 20% among heavy gamers (playing video games 11+ hours per week).

Commenting on the whitepaper, Nicole Pike, Global Sector Head of Esports & Gaming, YouGov said, “The continued growth of video gaming over the past two years has sky-rocketed gaming influencers to elite pop culture status, especially among Gen Z and millennial males. Gaming has evolved from a hobby to a primary form of entertainment and social engagement – and with this, personalities who stream gaming content have become the fan favorites of younger generations around the globe. Consumers are hungry for more ways to interact with gaming in their day-to-day lives, and gaming influencers have answered the call, connecting with fans across multiple platforms, while at the same time offering brand marketers a prime opportunity to engage with digital-first audiences who are becoming more difficult to reach via traditional media outlets.”