A quarter do not intend to celebrate this year

Chinese New Year is just around the corner, but not all Singaporeans are excited for this year’s festivities amidst the pandemic. Latest YouGov data looks at Singaporeans attitudes towards ushering in the Year of the Ox.

The COVID-19 pandemic has put a damper on all social gatherings and celebrations, given that people ought to be staying home, avoiding large groups and social distancing to help curb the spread of the virus. While Singapore has moved into Phase 3 of the circuit breaker, which allows for social gatherings of up to 8 people, more than half (57%) believe that the government should implement stricter measures, due the customary mass migration or movement this festive season. One in ten (22%) think that the measures should be much stricter, and over a third (35%) think they should be somewhat stricter. Two in ten (37%) believe the current measures are strict enough, and one in twenty (6%) think they ought to be loosened up. 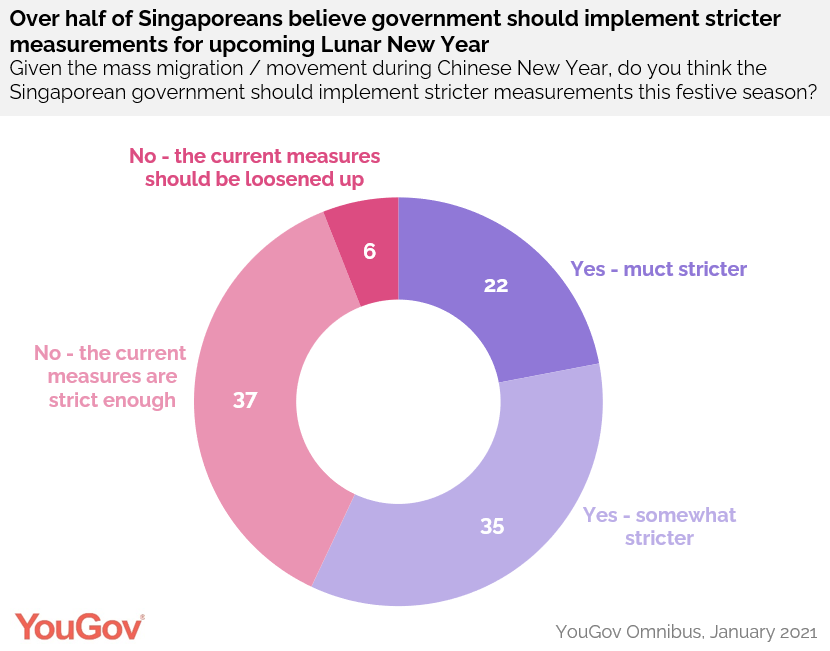 Typically, majority (77%) of Singaporeans celebrate Chinese New Year – as expected in Chinese-majority Singapore. However, this year only half (47%) intend to celebrate. A quarter (27%) are unsure if they will, and the remaining quarter (26%) will not be celebrating given the pandemic. Even amongst Chinese-Singaporeans, only slightly over half (56%) will be partaking in any Chinese New Year festivities. Low-income households (earning less than SGD 4,000 a month) also appear to be far less likely to be celebrating than high-income households (earning more than SGD 8,000 a month) (36% vs. 66%). 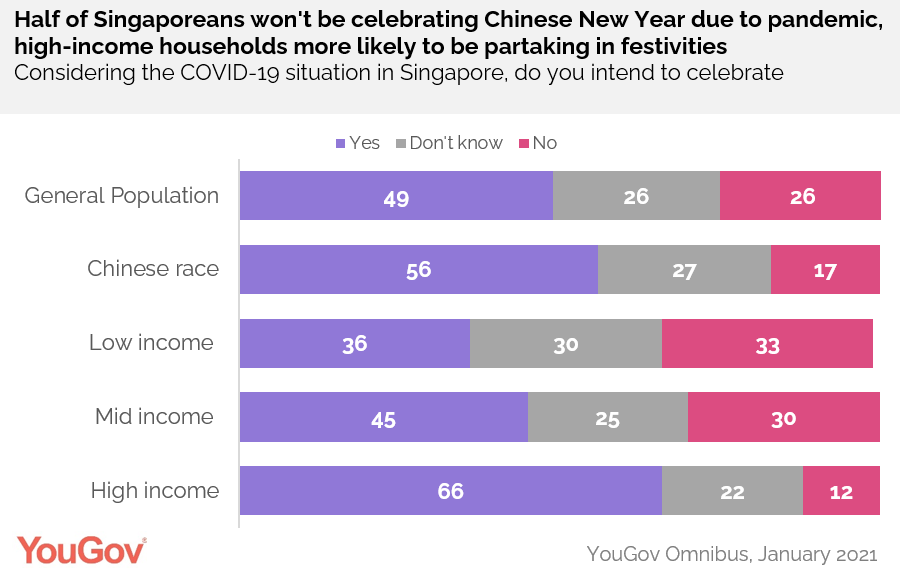 A big part of Chinese New Year celebrations involves the giving and receiving of red packets (ang bao). However, given the impact COVID-19 has had on many Singaporeans financial situation, YouGov polled respondents on whether this would play a part on how much ang bao they give out this year. Amongst those who usually celebrate, three quarters (77%) intend to give out ang pao this year – however, three in ten (28%) will be giving out a smaller amount than usual. About half (47%) will give the same amount as usual, and a small percentage (2%) will be giving out more. The remaining one quarter (23%) will not be giving out any ang pao this year.

***Results based on 1,040 Singaporeans polled on YouGov Omnibus