The topic of cancel culture has again become a topic of discussion in Singapore, following recent allegations of a local YouTube personality sexually harassing minors. Latest YouGov data looks at the modern day phenomenon of cancel culture and thoughts on what it takes to cancel a public figure or brand.

About half (47%) of Singaporeans have heard about cancel culture, but only a quarter (26%) know exactly what it means. Singaporean adults under the age of 34 are much more likely to know what the term means – with half (47%) claiming to know the definition of cancel culture. However, amongst those aged 35 to 44, this drops to only a quarter (27%). This further drops to one in ten (12%) for Singaporeans above the age of 55. For the purposes of this survey, ‘cancelling’ has been defined as withdrawing support for public figures and companies after they have done or said something considered objectionable or offensive. 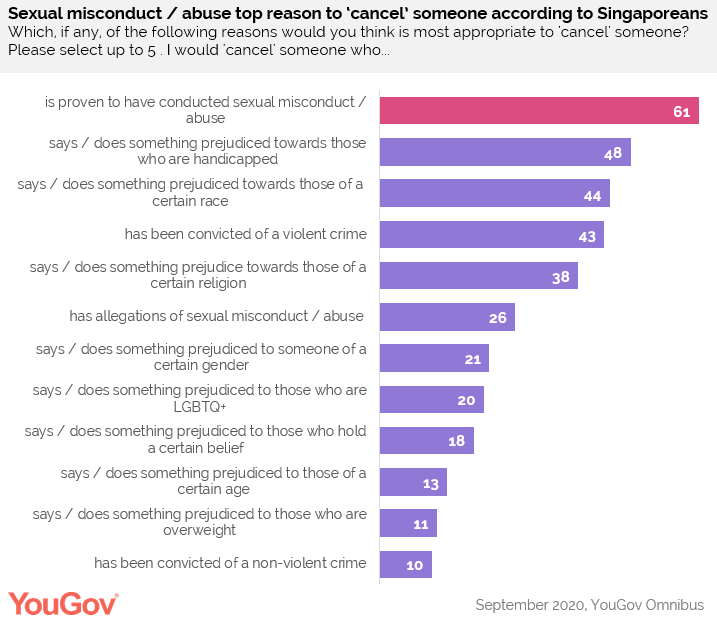 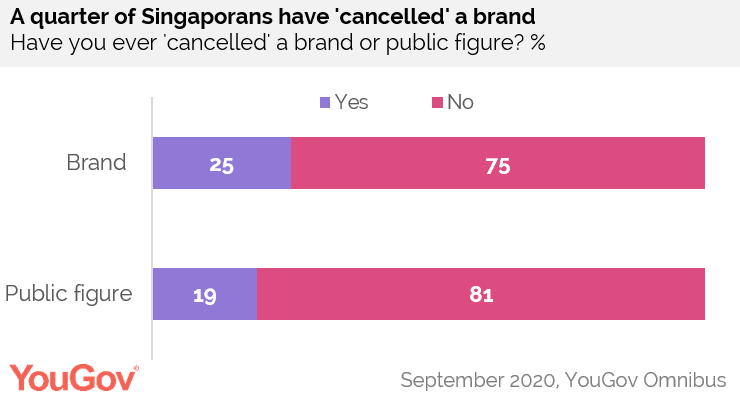 As a whole, about two thirds (63%) of Singaporeans agree that cancel culture keeps public figures and companies accountable for the things they say or do. Three in ten (31%) are undecided, and a small percentage (6%) disagree. However, two in five (44%) also say that cancel culture encourages cyberbullying – a similar amount (41%) neither agree nor disagree with this, and one in seven (15%) disagree.

Jake Gammon, Head of Omnibus APAC at YouGov commented: “While cancel culture has been chalked up to a ‘Western concept’, our data shows that a significant amount Singaporeans are aware of this practice of withdrawing support for a public figure or company, particularly those from younger generations. That being said, Singaporeans have their own ideas of what is a valid reason to ‘cancel’ someone, with some (i.e. doing / saying something racist) deemed more valid than others (i.e. doing / saying something discriminatory to someone who is overweight). While not many Singaporeans have actively ‘cancelled’ a person or a brand, it’ll be interesting to see if this changes in the upcoming months or years.”

***Results based on 1,072 Singaporeans surveyed on YouGov Omnibus