Latest YouGov data looks at how consumer perceptions fare during a pandemic, and asks Singaporeans what makes a company a good corporate citizen.

The COVID-19 pandemic has not only affected Singaporean lifestyles, it has also affected consumer’s perceptions of brands. Looking at the brands that people have most frequently interacted with during the pandemic, they are most likely to be described as socially responsible, with almost half (49%) saying so. This is followed by brands that are trustworthy (35%), caring (32%), sincere (31%) and genuine (27%). 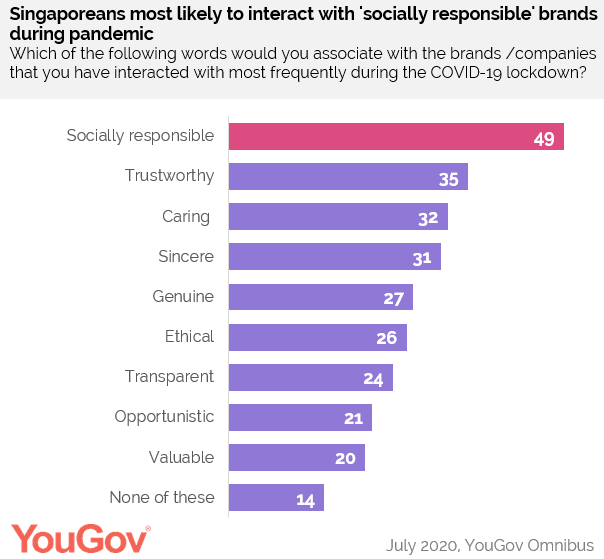 The majority (79%) of Singaporeans agree that they are more likely to purchase from brands with a strong social conscience. One in ten (10%) are undecided, and the other one in ten (11%) disagree. Younger Singaporeans (aged 18 to 24) are the most likely to strongly agree with this sentiment compared with older Singaporeans (aged 55 and above) (31% vs. 14%). About three in five (58%) agree that a lot of brands are doing good in Singapore during the crisis. A quarter (25%) disagree, and the remaining one in seven (15%) are undecided. However, Singaporeans are split in deciding whether brands are as sincere as they say they are during the crisis, an equal amount (38%) agree and disagree.

Three in five (59%) Singaporeans are now more likely to purchase from a brand with a strong COVID-19 response or focus. This is particularly true for men than women (62% vs. 56%). This is also the case for high-income earners (with a household income of more than SGD 8,000 a month) than low-income earners (household income of less than SGD 4000 a month) (66% vs. 53%).

Jake Gammon, Head of Omnibus APAC at YouGov Omnibus commented: “It’s interesting to see how consumer preferences shift and shape during a pandemic, and it is clear that amongst Singaporeans, socially responsible brands are the most likely to come up on top. Our data also shows that younger Singaporeans, and amongst females and high household income earners, socially conscious brands are more likely to curry favour.”

***Results based on 1,056 Singaporeans surveyed on YouGov Omnibus