Billions of people across the globe have had to change how they live and work due to COVID-19, including taking personal preventative measures to curb the spread of the virus. Latest YouGov data in partnership with the Institute of Global Health Innovation (IGHI) at Imperial College London looks at what steps people have personally taken across six ASEAN nations – Singapore, Malaysia, Indonesia, Thailand, the Philippines and Vietnam. 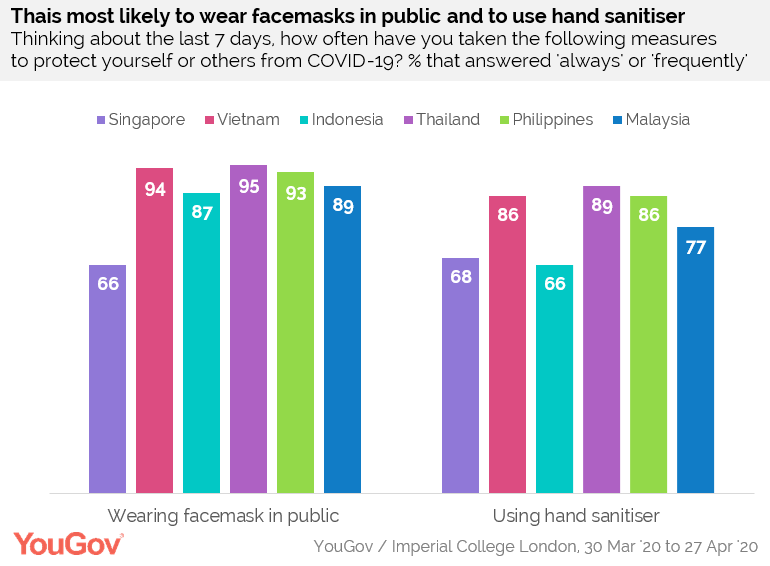 Although there was some initial confusion on whether facemasks help curb the spread of COVID-19, the use of facemasks has been generally widely encouraged across Asia, and in some instances mandated by law. For example, in Singapore, facemasks are compulsory when entering public spaces such as supermarkets, shopping malls and pharmacies. In the Philippines, failure to wear facemasks can result in penalties. Across the six ASEAN nations, the majority (86%) have reported wearing facemasks ‘always’ / ‘frequently’ when leaving the house. This is considerably higher than in Western nations like the UK (15%), France (44%) and the US (48%).

In spite of the being the only ASEAN nation to be given free facemasks by the government, data shows that Singaporeans are the least likely to don them. While almost all (95%) Thais have worn them always’ / ‘frequently’ in the past seven days – making them the highest adopter of facemask use in the six nations, only two thirds (66%) of Singaporeans have done the same. This is a notable difference compared to the second highest adopter of facemasks in the six nations – Vietnam (94%), followed by the Philippines (93%), Malaysia (89%) and Indonesia (87%).

One of the main guidelines from the WHO to protect oneself and others from the virus is the use of hand sanitisers. It appears Thais are the most likely to use them, with four in five (89%) having used them ‘always’ / ‘frequently’ in the past seven days. Indonesians are the least likely to use hand sanitisers, with only two thirds (66%) having done the same. This figure is lower than in Vietnam (86%), the Philippines (86%), Malaysia (77%) and Singapore (68%). 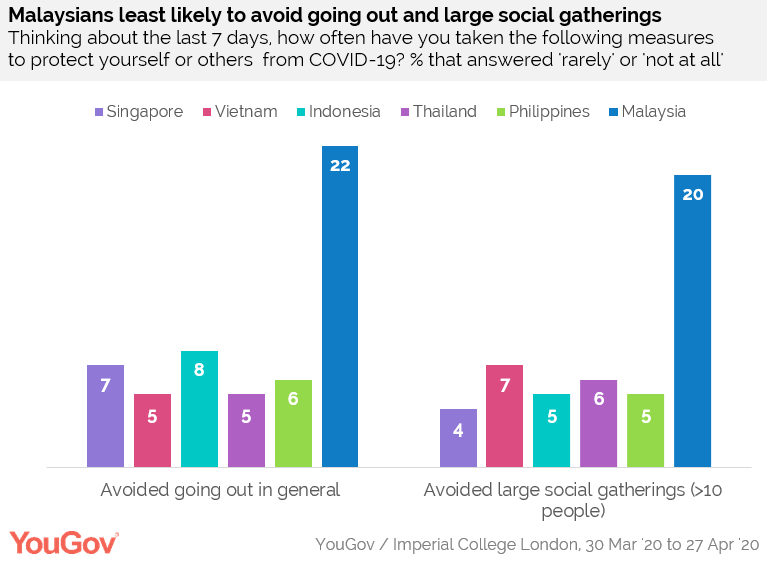 When it comes to avoiding going out in general, Malaysians are the least likely to do so – only one in five (22%) have said they almost never (‘rarely’ / ‘not at all’) avoid going out. This figure is significantly higher than in Indonesia (8%), Singapore (7%), the Philippines (6%), Vietnam (5%) and Thailand (5%).  Malaysians are also the least likely to avoid large-sized gatherings (i.e. more than 10 people), contrasted with their Singaporean neighbours who are the most likely to do avoid them. While one in five (20%) Malaysians have said they almost never avoid large-sized gatherings, less than one in twenty (4%) Singaporeans can say the same.

Methodology: The data is based on the interviews of 12,999 adults aged 18 and over across Singapore, Malaysia, Indonesia, Thailand, the Philippines and Vietnam. This survey was conducted by YouGov/Imperial College London fielded between 30th March 2020 to 27th April 2020. All interviews were conducted online and results have been weighted to be nationally representative.