Singapore continues to battle the rising number of COVID-19 cases – the vast majority of which comprise of migrant workers residing in dormitories. Latest YouGov data looks at what Singaporeans think of the large number of migrant worker cases and satisfaction with measures taken.

The surge of migrant worker cases since last month has subjected Singapore to a lot of criticism, and exposing the cramped, crowded and poor living conditions of low-wage foreign workers. The majority (87%) of Singaporeans agree that their living conditions need to be more strictly regulated – with three in five (60%) strongly agreeing and over a quarter (27%) slightly agreeing. One in ten (10%) are undecided, and a small percentage (4%) disagree.

Singaporeans appear to be less satisfied with employers than the government however; with under two in five (38%) agreeing that enough has been done for migrant workers. Three in ten (31%) are undecided and the remaining three in ten (31%) think that employers are not doing enough. 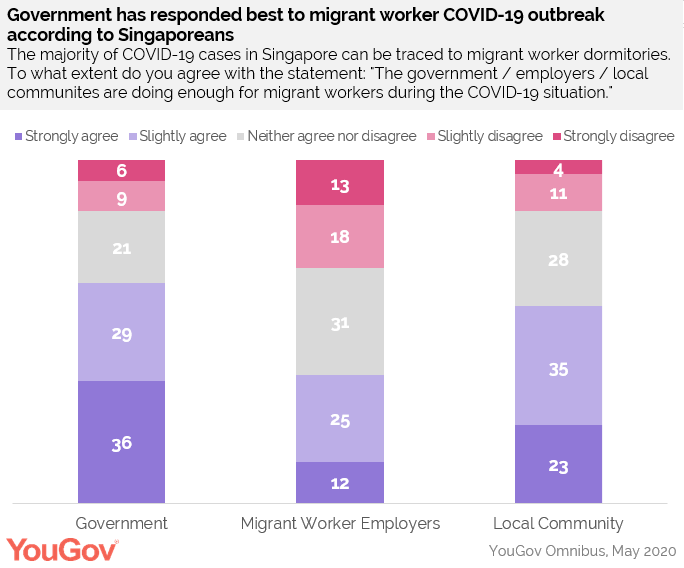 Jake Gammon, Head of Omnibus APAC at YouGov commented: “The issue surrounding migrant workers living conditions has resulted in polarising opinions both regionally and globally, and this is no different in Singapore. We wanted to find out how various stakeholders have responded to the situation locally – data shows they are most satisfied with the government, followed by the local community and the least satisfied with employers. This is perhaps unsurprising, as a large amount feel that the Singaporean government has done well in tackling and overall handling of the pandemic.”

***Results based on 1,055 Singaporeans surveyed by YouGov Omnibus