As Singapore enters into the third week of circuit breaker measures to curb the spread of COVID-19, YouGov data reveals how Singaporeans have been coping with isolation.

The majority (88%) of Singaporeans are isolating with someone else, with only one in eight (12%) isolating alone. When asked who they would isolate with given the choice, four in five (79%) would prefer an isolation buddy. The remaining one in five (21%) would rather isolate alone. Women are more likely than men to want to isolate alone (24% vs. 19%). Half (53%) would choose to isolate with their spouse or partner, a third (34%) with their children, three in ten (29%) with their parents, one in five (20%) with their siblings and a small percentage (4%) with someone else. 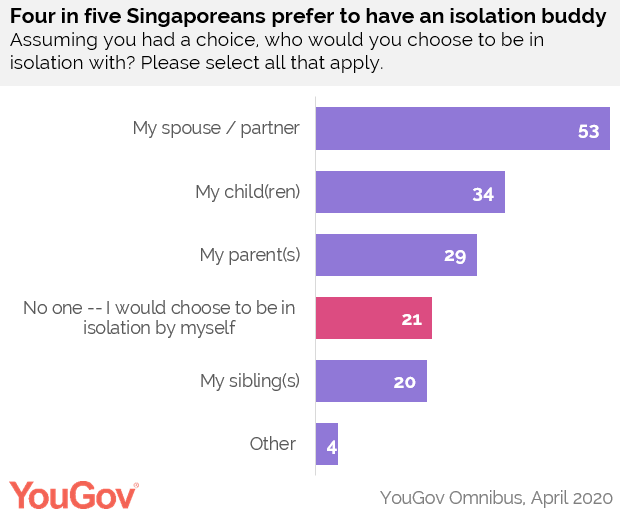 When it comes to challenges Singaporeans are personally facing during isolation, the main one is missing social interaction with people outside their household (50%). They also struggling to keep themselves in shape (44%), keeping themselves occupied (42%), maintaining a positive mindset (40%) and maintaining a healthy diet (34%). Only one in eight (12%) find that they are not personally facing challenges during isolation – with women more likely to feel so than men (15% vs. 9%).

Jake Gammon, Head of Omnibus APAC at YouGov commented: “With the recent announcement of the extension of circuit breaker measures, and the nation under strict instructions to isolate, we wanted to find out Singaporeans are coping with staying at home. It appears that most are coping well, perhaps in part to the fact that the majority have someone to keep them company, and that most would prefer to have an isolation buddy.”

***Results based on 1,052 Singaporeans surveyed by YouGov Omnibus