The results of a new international study of more than 14,000 people across 13 countries – conducted by YouGov in partnership with the Institute of Global Health Innovation (IGHI) at Imperial College London – track how well the public in each nation are adopting measures to stymy COVID-19.

The next wave of this study will expand the roster to 29 countries and regions. IGHI has built a publicly available dashboard to visualise the data at coviddatahub.com. YouGov are also making anonymised respondent level data from all countries surveyed freely available to all public health and academic institutions globally to aid in the fight against COVID-19. It can be downloaded from: github.com/YouGov-Data/covid-19-tracker.

More details about the collaboration can be found here.

Self-isolation is one of the key weapons in the arsenal against coronavirus.

Britons prove to be the most willing to voluntarily self-isolate, with 92% saying they would do so if they felt unwell or experienced a dry cough, fever, loss of sense of taste or smell, shortness of breath or difficulty breathing. 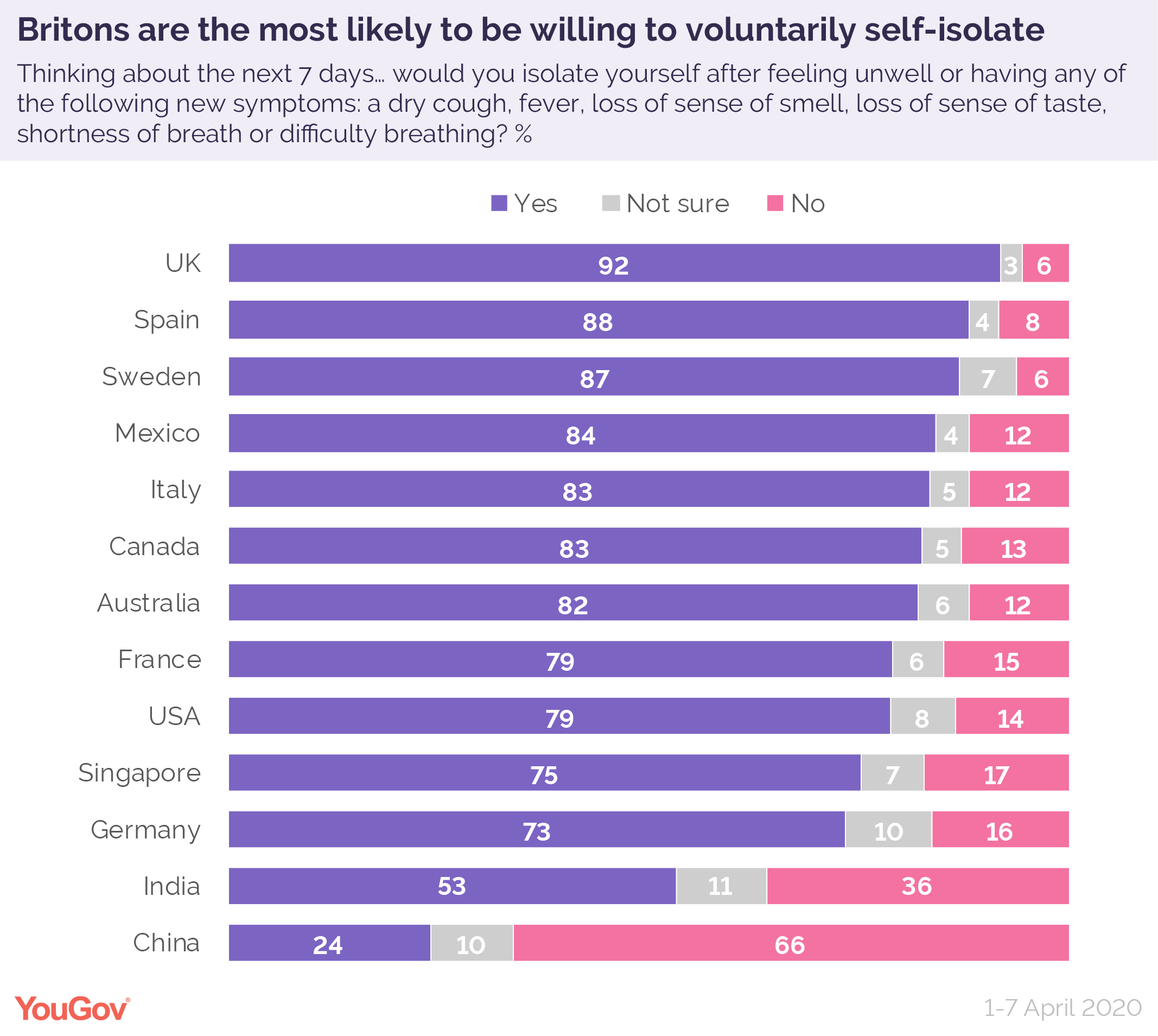 People in Spain are the next most-compliant at 88%, followed by Swedes at 87%.

While large majorities in most countries are willing to voluntarily self-isolate, India and China prove notable exceptions. In India only around half (53%) are willing to do so, while in China the figure stands at just 24%.

We asked potentially symptomatic respondents – those who had experienced a dry cough, shortness of breath or difficulty breathing, fever, or a loss of sense of taste or smell in the last seven days – to what extent they had self-isolated themselves. 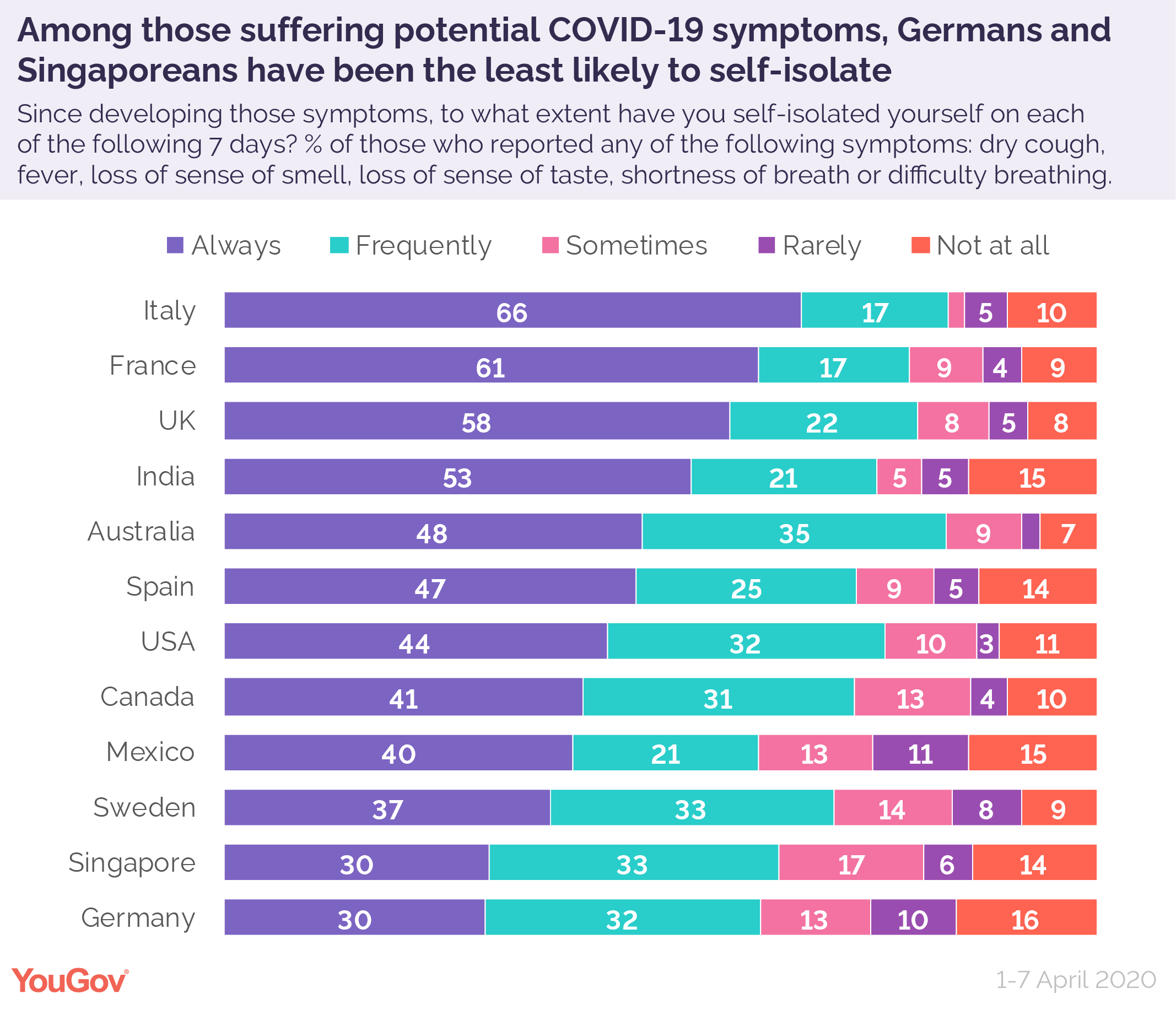 Singaporeans and Germans who had experienced potential symptoms were the least likely to say they had kept always themselves isolated, at just 30%.

The survey shows that Spanish (63%) and Italians (61%) are the most likely to be staying home, saying they had not left the house a single time in the previous day. In addition, a further 26% of people in Spain and 30% of those in Italy had only left their premises once the previous day, meaning that around nine in ten had left the house no more than once. 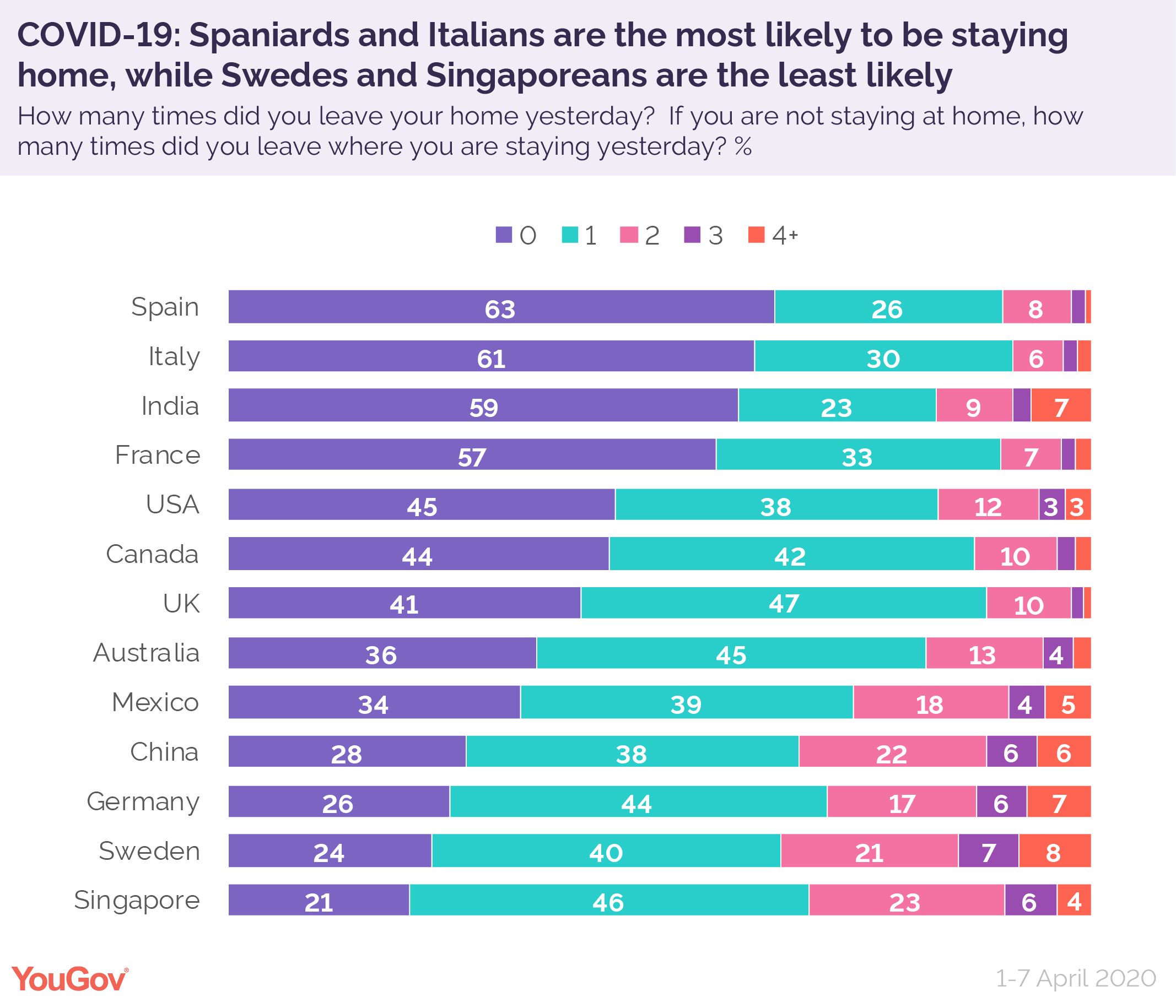 Singaporeans are the most likely to have ventured outside, with only 21% saying they hadn’t left the house the previous day.

One of the most effective defences against COVID-19 is thorough personal hygiene, with a plethora of guidance available on the most appropriate way to wash your hands. Italians and Swedes are the most frequent hand-washers, with people in these countries saying they wash their hands on average 14 times a day.

In Britain that figure stands at 12, with those in China being the least frequent soap and water scrubbers at six. 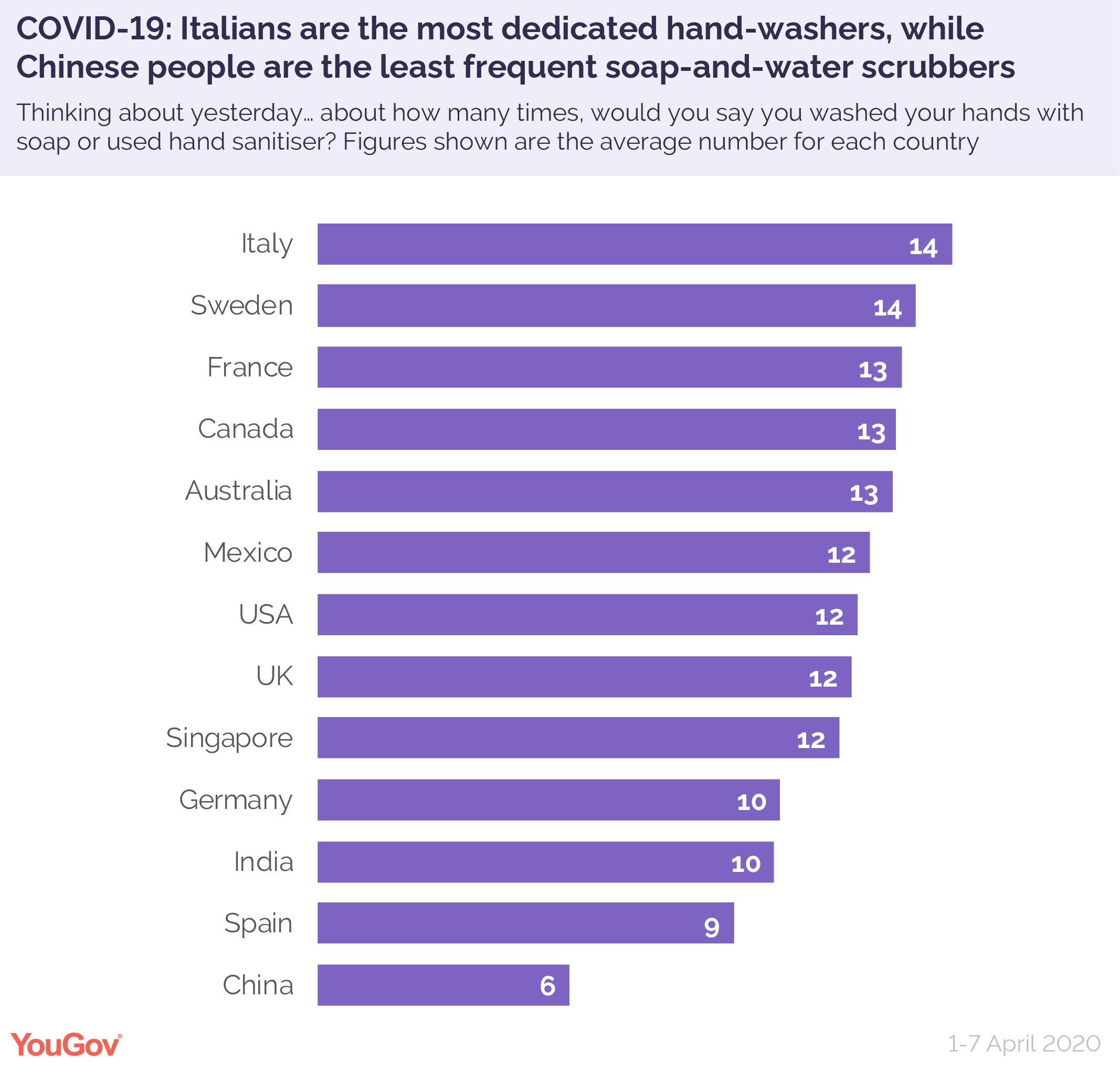 The survey also asked people how often they were performing an array of protective behaviours. We’ve chosen to focus on four for the chart below: avoiding crowded areas, avoiding going to shops, avoiding touching objects in public, avoiding taking public transport.

Brits are the second most likely to say they are always or frequently avoiding crowds (96%) and public transport (92%), but are further down the rankings when it comes to not touching objects in public areas (81%) or avoiding shops (72%). 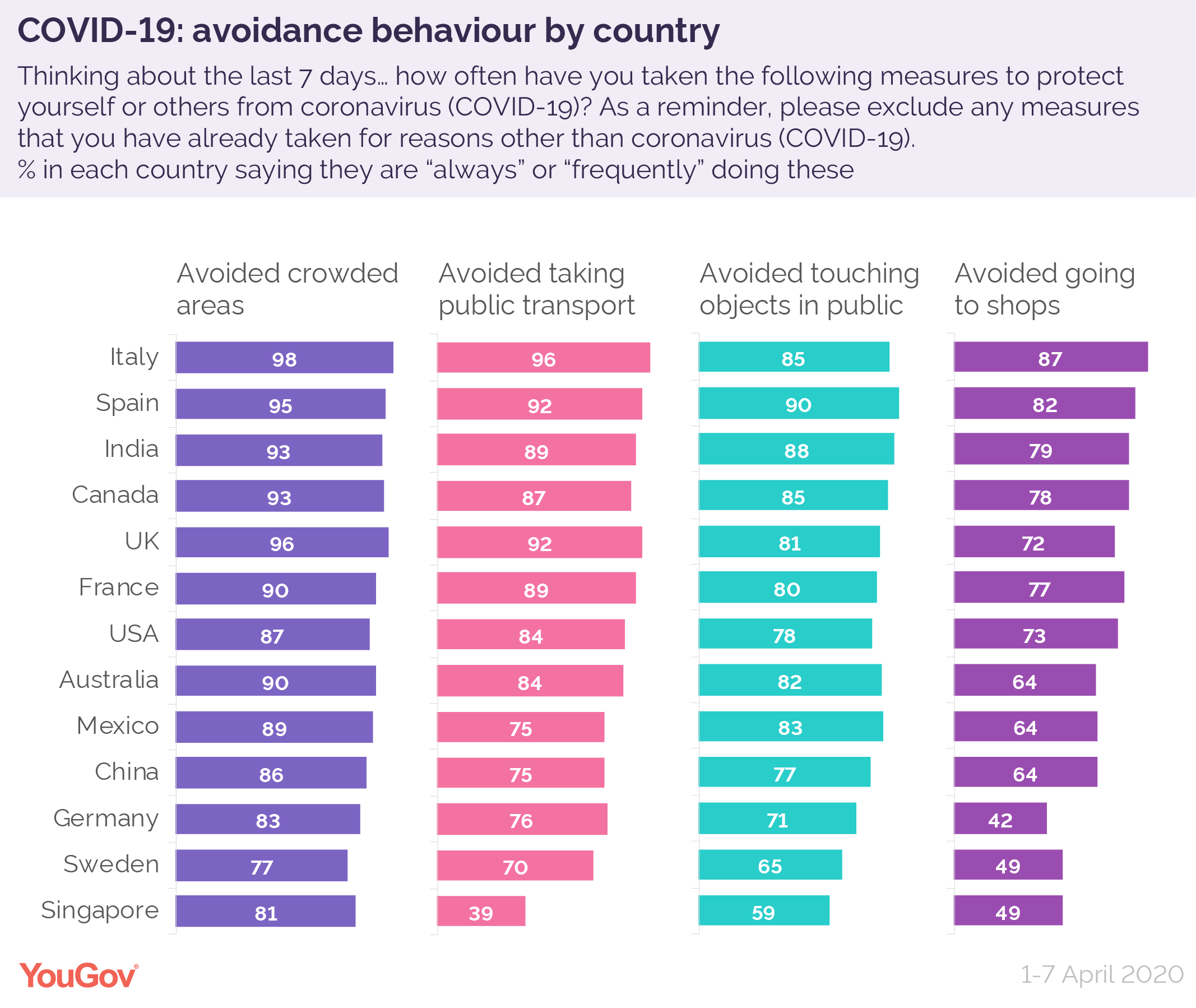