As one of the largest destination countries for foreign domestic workers in Southeast Asia, latest YouGov research looks into what Singaporeans think about the rights and lives of domestic helpers.

While Singaporean law does not set a minimum wage for domestic helpers, the government of the Philippines for example, require their maids to be paid at least SGD 570 a month. Half (48%) of Singaporeans however, think that domestic helpers should be paid less than SGD 600 a month. The remaining half (52%) think they should be paid more than SGD 600 a month. 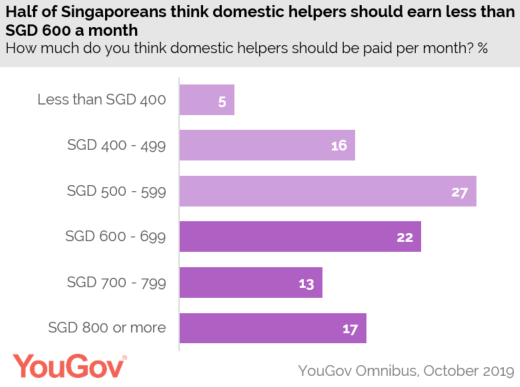 Other guidelines, such as the Employment of Foreign Manpower Act states that domestic helpers are entitled to one rest day a week. The majority (68%) agree that this is adequate and one in six (16%) find this inadequate. The remaining one in six (16%) think this is more than adequate, and that one rest day a week is more than sufficient. Those that employ a domestic helper are more likely to find one rest a day week more than sufficient than those who do not (28% vs. 14%).

About one in six (17%) Singaporean households currently employ a domestic helper. Amongst high income households (earning more than SGD 15,000 a month), this jumps to three in ten (32%). Most (44%) of the domestic helpers in Singapore are from Indonesia, followed by the Philippines (26%), Myanmar (11%) and Malaysia (7%). The remaining 12% are from various countries.

Overall, more than half (55%) agree that Singapore has sufficient laws in place to protect the rights of domestic helpers. Three in ten (31%) are undecided and the remaining one in eight (13%) think that current laws are insufficient.

Jake Gammon, Head of Omnibus APAC at YouGov Omnibus commented: “With the sheer number of foreign domestic workers in Singapore, we wanted to find out what Singaporeans thought about the people taking care of their homes or their children. It appears that most are content with the current rights and quality of life for domestic helpers. What is interesting is how views vary between employers and non-employers of domestic helpers, with the latter thinking they deserve more time off.”

***Results based on 1,060 Singaporeans surveyed on YouGov Omnibus