by
Kim Ho
in
Automotive & transport

Electric scooters ranked as most dangerous mode of transport 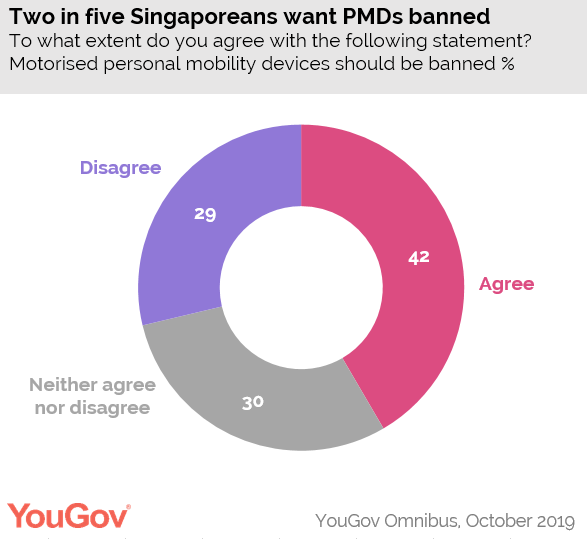 Overall three in five (60%) of Singaporeans would classify PMDs as dangerous. One in seven (14%) think they are safe, and the remaining quarter (25%) are undecided. When asked to rank modes of transport from most dangerous to least dangerous to pedestrians, electric scooters came up on top (49% ranked as most dangerous), ahead of cars (19%). This is followed by motorbikes (11%), electric bicycles (9%), skateboards (7%), kick scooters (3%) and pedal bicycles (2%).

The good news for those who aren’t fans of PMDs is that they aren’t that prevalent. Only one in twenty (6%) currently own a PMD. Men are three times more likely than women to own one. (9% vs. 3%).

Jake Gammon, Head of Omnibus APAC at YouGov Omnibus commented: “PMDs are a controversial topic at the moment, and something that clearly has Singaporeans divided. Whether an altogether ban or restrictions placed on use, many people want something to be done about PMDs -- which will hopefully prevent fatalities happening again in future.”

***Results based on 1,116 Singaporeans surveyed by YouGov Omnibus