Up until recently, Huawei enjoyed good brand health, due to the launch of the highly anticipated P30 model. The P30 model, with its ‘SuperZoom’ lens was advertised as “accentuating a new peak of smartphone photography”.

Although the P30 launched in Paris two weeks before arriving the Singapore market, talk surrounding the brand began before it even hit the market. On the day of the Paris launch Huawei’s Buzz score was at 18.8, but at the date of the Singapore launch on 6 April 2019 it stood at 23.9, a rise of +5.1 points. The excitement for the new phone had Singaporeans lining up the night before the unveiling.

The buzz surrounding the P30 didn’t die out after the launch. A month later, its Buzz score peaked at 36.6. 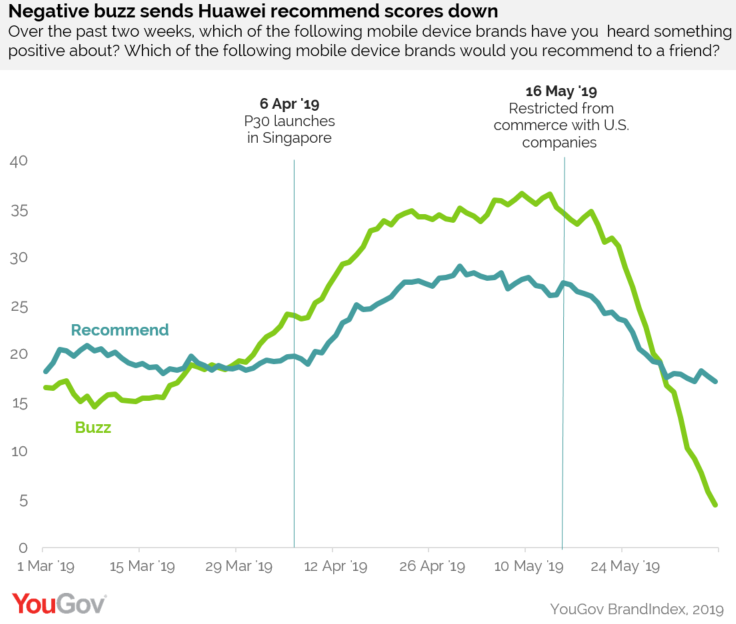 Trouble for Huawei began however, on 16 May 2019, when Huawei was restricted from doing commerce with U.S companies. The result of these restrictions is tech companies such as Google, Intel and Qualcomm removing Huawei from their hardware, software and services.

Since the day of U.S. restrictions, Huawei’s BrandIndex scores have been sent in decline. Its Buzz score which stood at 35.1, has since dropped -30.7 points, and now stands at 4.4 – the lowest ever level YouGov has measured for the brand. Singaporean consumers are also now less likely to recommend the brand now, with its Recommend score falling -10 points from 27.1 to 17.1.

Not all metrics, were badly affected by the announcement of U.S restrictions. Huawei’s Ad Awareness score fell slightly, but remains at a high of 41.5 – meaning people are continuing to notice Huawei ads. However, these ads have had no impact on declining Consideration scores – which measures whether people are considering purchasing a brand. Consideration scores fell from 32.4 to 24.7, a drop of -7.7 points. 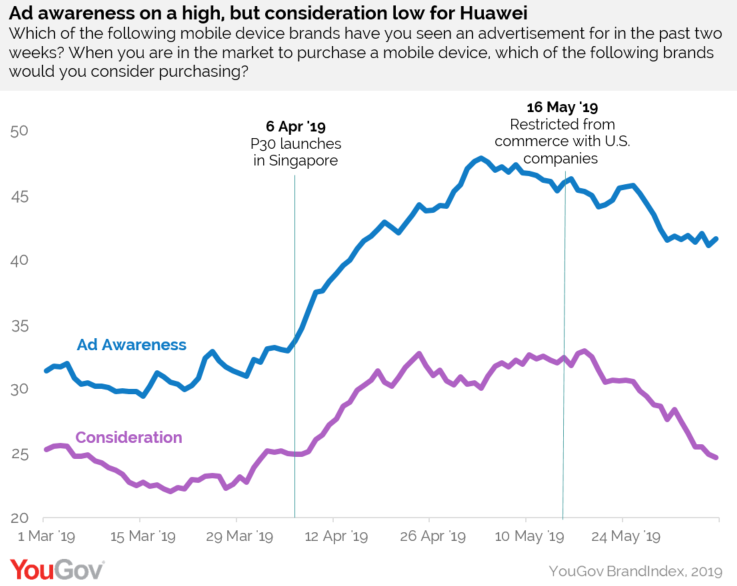 Ervin Ha, Head of Data Products for YouGov APAC commented: “Huawei has experienced both brand health highs and lows as of late. It’s rise in scores following the launch of P30 is something to be commended, although this was short-lived. U.S. restrictions have hit Huawei’s brand health scores hard, and we’ll be watching to see the brand’s next move.”