Two in five have a negative impression of people with tattoos

Having a tattoo could harm your chances of getting hired in Singapore, the latest YouGov research finds.

Although one in ten (10%) of Singaporeans have a tattoo, approaching half (47%) say they would be less likely to hire someone with a tattoo, even if they were qualified for the position. Older Singaporeans are more likely than younger ones to hold this view. While almost six in ten (59%) of those aged 55 and over say they would be less likely to take someone on if they had a tattoo, this figure falls to one in there (33%) among 18-24 year-olds.

YouGov’s research finds that around half (48%) of those asked say a candidate’s tattoo would have no effect on their decision to hire, while another 5% say it would make them more likely to give them a job. 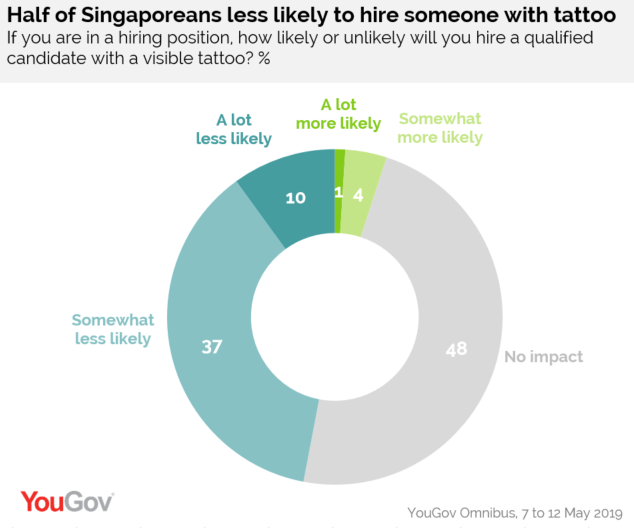 The research finds that in general Singaporeans have quite a conservative view of tattoos in the workplace. Six in ten (58%) think they should be covered at the workplace while seven in ten (70%) believe that certain professions are unsuitable for people with tattoos. However, half (50%) also reckon that tattoos should not impact a person’s employability.

Jake Gammon, Head of Omnibus APAC at YouGov Omnibus commented: “Though tattoos are becoming more mainstream, they appear to be largely unwelcome in the workplace. Not only do tattooed people leave a bad impression on a significant proportion of Singaporeans, they also affect employability.”

***Results based on 1,075 Singaporeans surveyed by YouGov Omnibus