by
Kim Ho
in
Legal

The Protection from Online Falsehoods and Manipulation (POFMA) Bill is designed to tackle online falsehoods and was recently passed in Parliament. YouGov’s research shows that over half (55%) of Singaporeans support the Bill, around two in ten (18%) oppose it and a quarter (25%) are undecided. The other 2% chose not to say.

Support for the Bill is more prevalent amongst women, with six in ten (62%) supporting its introduction compared to half (47%) of men. Singaporeans with children are also more likely to support POFMA than those without (62% vs. 52%).

Stances on the issue are the same across all age groups. 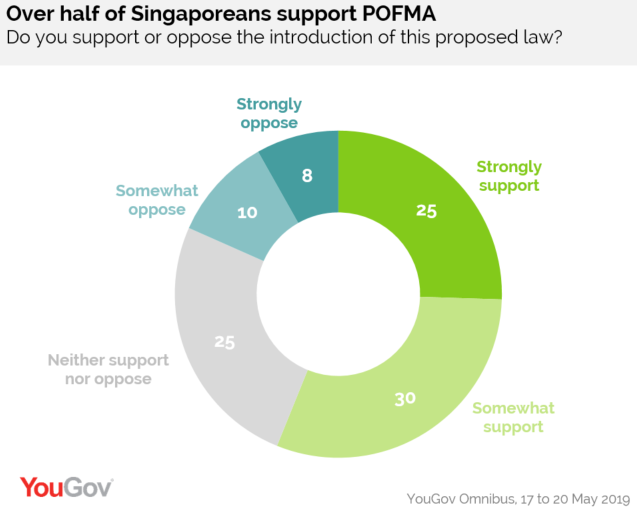 Although the Bill has been widely-debated as well as covered in the media, not all Singaporeans are aware of POFMA. Only half (52%) have heard of the Bill, with Singaporean men being much more likely than women to be aware of it (67% vs 38%). Older Singaporeans are also more aware of the legislation – among those aged 55 and above, six in ten (63%) know about POFMA, a number drops to three in ten (34%) of those aged 18 to 24.

Jake Gammon, Head of YouGov APAC Omnibus said: “With the on-going discussion about POFMA, it’s interesting to find out Singaporeans’ views of the Bill. While half of Singaporeans support the Bill, this research shows that there are divisions – particularly between men and women. But the research also shows that despite widespread coverage for the proposal, many Singaporeans have not heard of it, suggesting that more may need be done to let the public know about it.”

***Results based on 1,036 Singaporeans surveyed on YouGov Omnibus