Following a difficult period, MRT is back on track with consumer satisfaction on the rise. 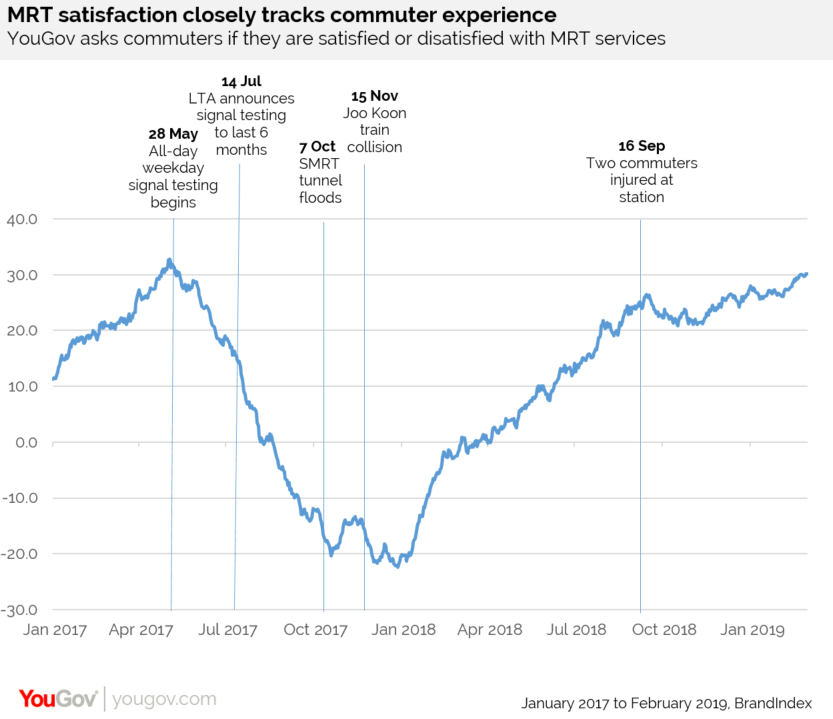 After a torrid period for the MRT, the transport provider has made great strides towards recovery when it comes to customer satisfaction – new analysis from YouGov Plan & Track shows. However, although it has recovered much of the ground it lost after its troubled-filled 2017, it has still not got back to its previous heights.

YouGov collects data from MRT customers on a daily basis, measuring their perception of the brand. People are asked their opinions across a range of different measures, and by subtracting negative responses from positive ones, YouGov calculates a score (so if an equal number of people feel positively as well as negatively then the score will be zero).

The data shows that in May 2017, satisfaction in MRT among its customers bit an all-time high of 31.9. However, following a series of incidents on the service, it then dropped sharply – bottoming out to an all-time low of 21.6 in January 2018. However, despite its scores improving vastly over the past 15 months, it has still not regained all of the ground it lost – with MRT’s current Satisfaction score among its customers standing at 29.4.

YouGov Plan & Track data pinpoints when its scores fell. After a series of weekday signal testing that began in May 2017, its scores fell from 29.0 to 14.8 over the following two weeks. Its scores fell further when it was announced in July 2017 that these tests would last for six months.

But it was not just signalling that made the news for MRT over this period. In the October of that year, it experienced flooding in one of its tunnels and the following month two of its trains collided. Following both of these incidents the MRT’s Satisfaction score experienced small drops.

However, from January 2018, the transport system’s scores have steadily improved and several factors may have helped with this. Firstly, it made an effort to improve commuter experience. For example, the brand installed device-charging kiosks at 30 separate stations, as well as introducing the ‘SmartConnect 3.0’ app, which provided real-time displays of train arrival times.

The only notable negative incident for MRT since the start of 2018 came when two commuters were injured at City Hall station last September. Following this incident, the Satisfaction score among its customers had a slight wobble but then continued its recovery (albeit at a slower pace than before).

MRT has had a rough ride among its customers in recent times, falling from an all-time high to an all-time low within the space of a year. While customer satisfaction has improved considerably, it has still not got back to where it was.