But the longer you have been in a relationship, the less likely you are to mark Valentine’s Day

Valentine’s Day (14th February), which marks the celebration of romantic love in many regions around the world, is almost here. But new YouGov research shows that while 99% of Singaporeans are aware of it, only a third (34%) will be marking it – and the longer people have been in relationships the less likely they are to do anything.

Singaporeans currently in a relationship are the most likely to celebrate Valentine’s Day, with six in ten (63%) intending to do something special. This is in contrast to married Singaporeans – where fewer than four in ten (37%) will. Valentine’s Day is also more popular among younger people, with more than four in ten (45%) of those aged 18-24 celebrating compared to under a quarter (24%) of those aged 55 and over. 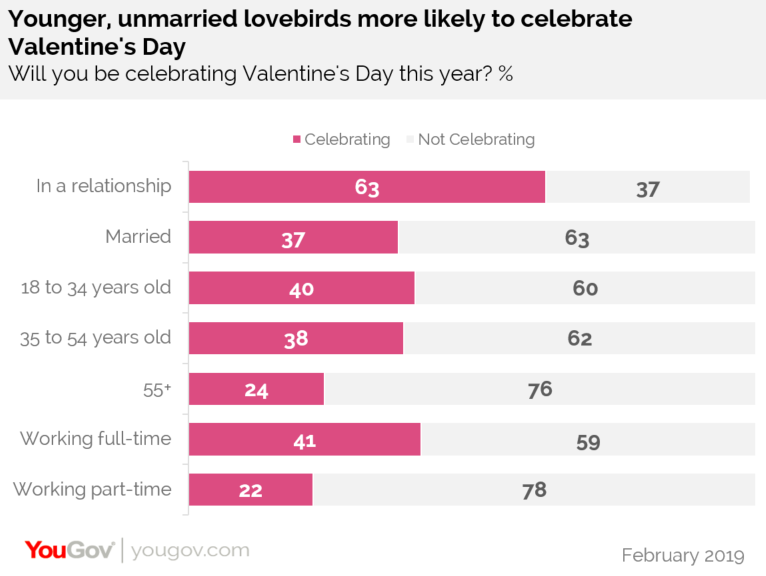 Whether someone marks Valentine’s Day also depends on how long they have been with their significant other. While three quarters (76%) of those who have been with their partner for less than a year will be celebrating, this drops to 48% for couples who’ve been together for 5 to 10 years. This drops further still (to 27%) for people who’ve been together for 20 years or more. 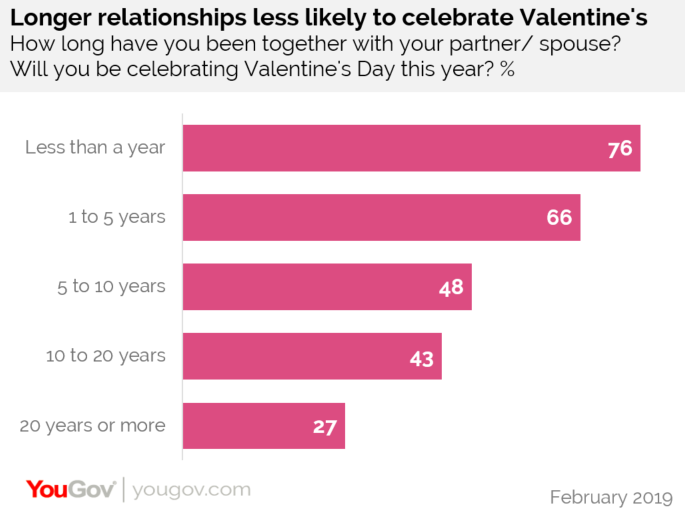 For those who will be celebrating, eight in ten (81%) will give a gift. On average, Singaporeans marking the day will spend SGD 123 on a present, with most paying by via credit card (56%), followed by cash (23%) and debit card (19%). For 2% of Singaporeans, their gift will be something that doesn’t cost money.

Among the two thirds (66%) of Singaporeans who won’t be celebrating, the top reason for not doing so is that they find it too commercialised (47%). Other popular reasons are that they think Valentine’s is just like any other day (46%), that everything is more expensive on Valentine’s Day (36%) and that they don’t have a partner to celebrate with (26%).

Jake Gammon, Head of YouGov Omnibus in APAC commented: “Much of the world will be marking Valentine’s Day, and many Singaporeans are also getting involved. However, just being in a relationship does not mean you will be marking the occasion. Our data shows that the longer someone has been with their partner, the less likely they are to do anything for Valentine’s Day.”

***Results based on 1,041 Singaporeans surveyed by YouGov Omnibus