Half of Singaporeans sleep with a ‘chou chou’

Sleep plays a big role in our everyday lives, but only half of Singaporeans are getting enough shut-eye, new research from YouGov Omnibus finds.

The data shows that four in ten (44%) get less than seven hours of sleep a night. According to Healthline the average adult should get between seven and eight hours sleep a night but our data finds that only half (48%) of Singaporean adults do 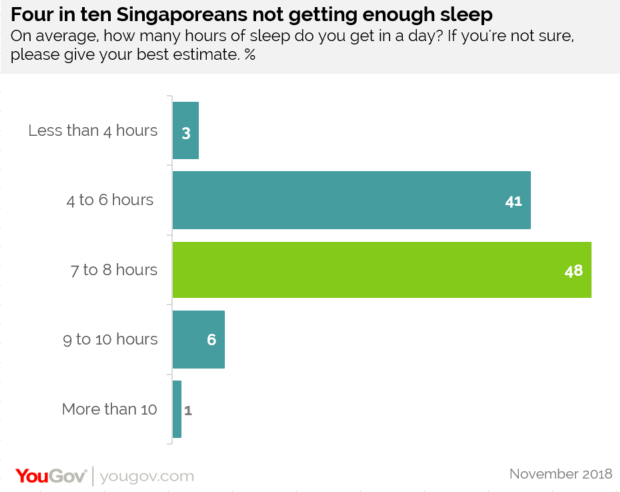 While 3% of Singaporeans get less than 4 hours of sleep a night, this number doubles (6%) for those with a household income of less than SGD 4,000 a month. 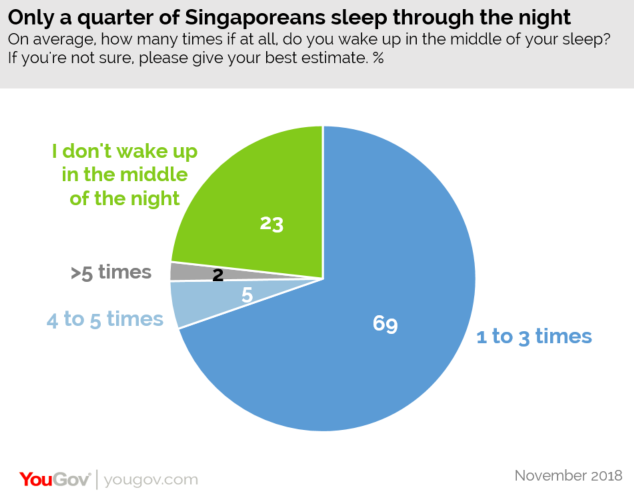 The research also reveals that three quarters of Singaporeans (77%) wake up at least once a night, with the remaining quarter (23%) sleeping through the night. Those who sleep through the night are more likely than the population as a whole to describe their quality of sleep as good (71% compared to 41%). Singaporeans aged 55 and over also appear to be sleeping better, at 45% describing their quality of sleep as good.

YouGov’s study finds that half (53%) of Singaporeans sleep with a ‘comfort object’, colloquially known as a ‘chou chou’; which is some type of stuffed toy or security blanket. Women are more likely than men to do so (61% vs. 44%). The use of comfort objects also varies by age with Singaporeans aged 25 to 34 being much more likely to than those aged 55 and over (61% vs. 32%). However, there is no indication that those who have a ‘comfort object’ have better (or longer) hours of sleep than those who don’t.

Jake Gammon, Head of YouGov Omnibus in APAC commented: “In a fast-paced metropolis like Singapore, only about half it’s citizens are getting enough rest. What’s particularly worrying is lower-income Singaporeans are twice as likely to get less than 4 hours of sleep a night. Once Singaporeans turn 55 however (the minimum age to withdraw from CPF), their quality of sleep seems to improve; suggesting demanding work could be the cause of sleepless nights”.

**Results based on 1,022 Singaporeans surveyed by YouGov Omnibus.