This month, Huawei is the brand which has achieved the greatest uplift in Ad Awareness in Singapore. The Chinese tech giant recently unveiled its new P20 and P20 Pro devices, which went on sale on the 7th April.

The phones include a range of new features including multiple high tech cameras, large vibrant LCD screens and what is said to be a ‘staggeringly long’ battery life.

Huawei have released several different adverts to promote the launch of the P20 and its big brother, the P20 plus. Most notably, actress Gal Gadot (best known for her role as Wonder Woman) is the new face and Chief Experience Officer of the brand, and features in the new campaign which has been released globally.

People are certainly noticing the ads. In Singapore, Huawei’s Ad Awareness score increased around the release of the new phones, from +11 at the end of March to +20 at its peak on the 15th April. 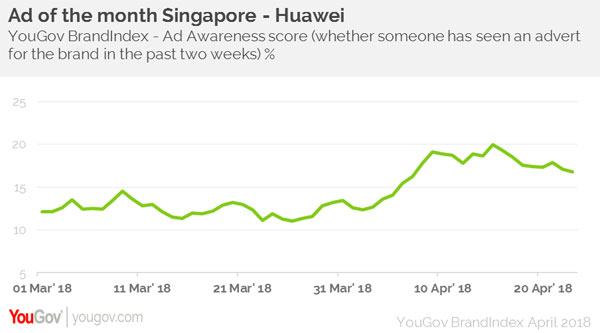 The ads have also had notable influence on the brand’s Purchase Consideration score (whether someone would purchase from Huawei when they were next in the market to buy a mobile device). Consideration jumped from +9 at the beginning of April to a peak of +15 just after the Singaporean launch on the 9th April.

Huawei’s ad campaign for the P20 and P20 Plus consolidates its position as a major player in the Asian tech market, and coincides with a greater push into European territories where it’s looking to increase its share against industry leaders like Samsung and Apple.