Much has been made of the advancements in lab-grown meat as a means of meeting the rising demand for meat products. Indeed, the industry has attracted support famous philanthropists such as Bill Gates and Richard Branson, who believe that cultivating such products can reduce the negative impacts to the environment, animal welfare and human health that arise as a result of conventional meat production.

New YouGov research reveals what the public really think about artificial meat. The research finds that some consumers see benefits from the technology, recognizing its potential to tackle the ethical and environmental problems meat production poses. The most widely-perceived advantages are that it prevents the killing of animals (50% believe this to be the case), it has the potential to end world hunger (41%) and it is a more sustainable food source than conventional meat (41%).

However, the public do have some concerns, most notably about the potential side-effects of artificial meat. Nearly three quarters of consumers (73%) are worried about this, and half of consumers (50%) are concerned that it could be dangerous. Some also object to the fundamental principles behind its development; 59% worry that it’s simply not natural and 48% are concerned that it’s not real meat. 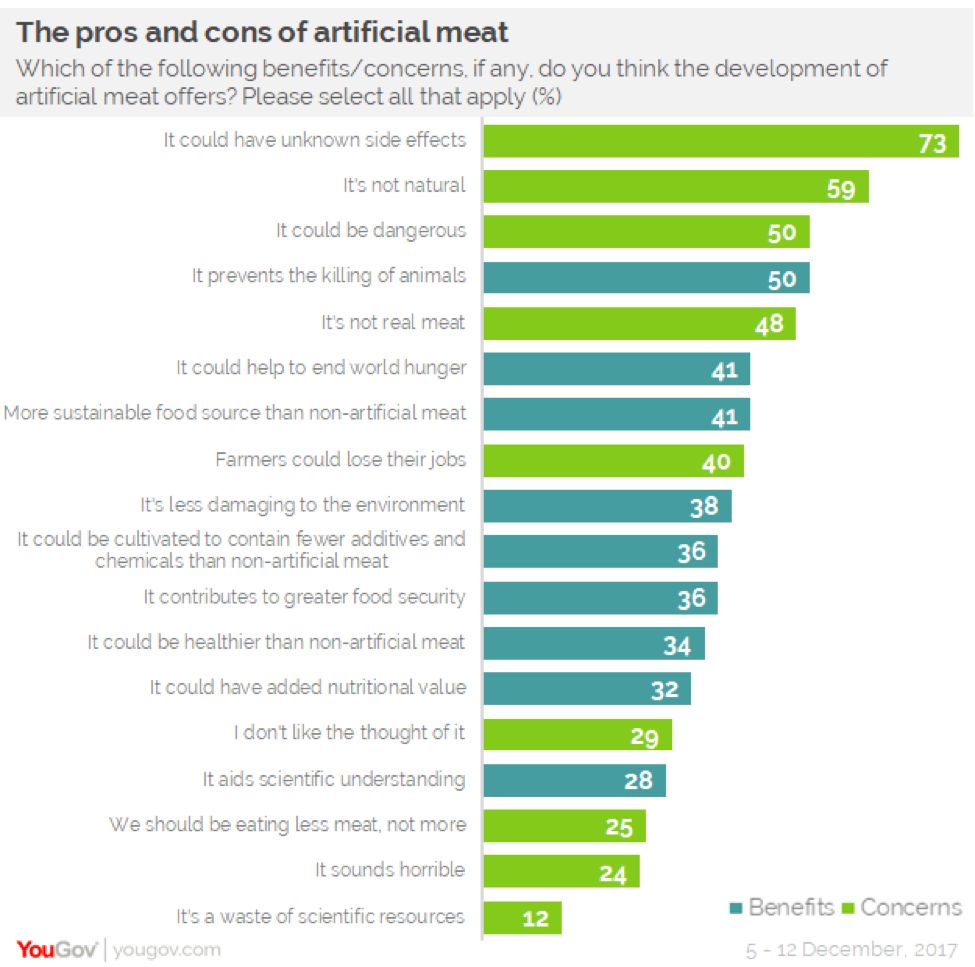 Half (51%) of Singaporean adults say they ‘would probably not eat’ artificial meat when asked to imagine it was available commercially. 31% ‘probably would eat’ the meat, while a further 18% haven’t made up their mind.

Millennials (those aged between 16 and 34) are more receptive to trying artificial meat, with more than a third (36%) probably would eat it, compared with just a quarter (25%) of older generations who say the same.

Vietnamese consumers are the most open to eating artificial meat

Compared to the wider region, the 31% of Singaporeans who say they would probably eat artificial meat are similar to the regional average of 32%. Vietnamese consumers are the most likely to say they would try it (52% say as much), followed by Thai (34%) and Indonesian (33%) consumers. By contrast, just a quarter of Malaysian (25%) and Chinese (26%) consumers say the same; the lowest out of the nine countries surveyed.

Commenting on the findings, YouGov’s Head of Omnibus, Jake Gammon, said, “Pioneers of artificial meat have been working hard to drive production costs down to make such products more accessible to consumers. However, this research suggests that there is one final hurdle that manufacturers still need to tackle… consumer demand. Despite widespread exposure, consumers still appear sceptical about artificial meat. Unless they have their fears assuaged and are clearer on the potential benefits of such technology it will be an uphill struggle for producers ahead.”

*Data was collected online by YouGov Omnibus between 5 and 12 December 2017 among 1,012 respondents in Singapore. Results are representative of the adult population.