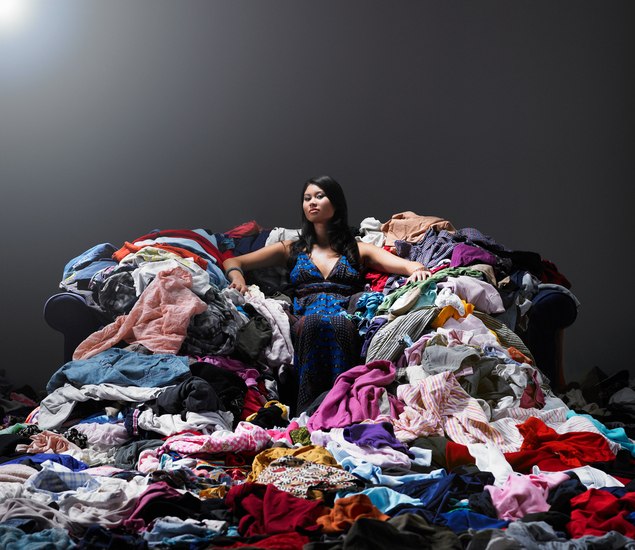 Fast fashion has transformed the way we shop. The advent of more accessible and affordable fashion means that consumers are shopping more than ever before. The number of garments bought by the average shopper each year grew by 60% between 2000 and 2014 alone. With new lines added on a weekly basis, consumers no longer need to wait for the seasons to change to buy the latest trends. High street chains have come to dominate the market, so much so that fast fashion giant H&M is now twice as valuable as Chanel.

While many welcome the fashion revolution, accidents such as the Rana Plaza tragedy and accusations of exploitation have embroiled popular brands such as Zara, leading to questions over the industry’s ethics. Critics have also highlighted the impact that fast fashion brands have on the environment, fueling demand for cheap, disposable clothing that is carbon-intensive to produce and often ends up in landfill.

Fashion is big business in Singapore, with one in seven of those polled (14%) estimating that they own over 100 garments (excluding underwear or accessories). Millennials (those aged between 16 and 34) have the highest proportion of new clothing; 30% of millennials say they have purchased at least half of the clothes that they own in the past year alone. This compares with 14% of baby boomers (those over 55) that say the same. 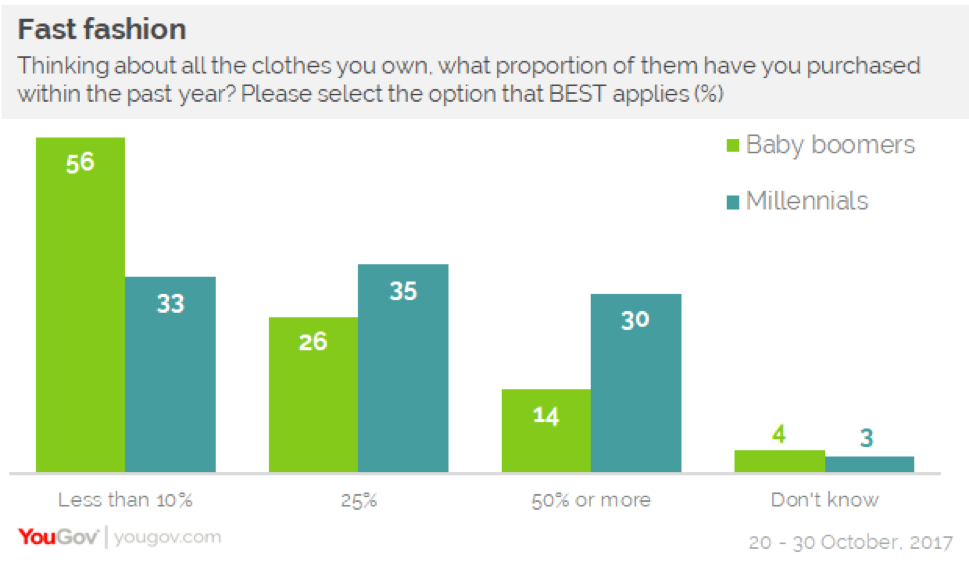 Millennials are also more likely to throw away clothes than older generations. 7% of millennials say that, in general, they keep their clothes for under a year before throwing them away. Just 3% of baby boomers say the same.

Four in ten millennials have thrown unwanted clothes in the bin

Not only do millennials dispose of clothes more quickly than their elders but they are also less likely to get rid of their unwanted clothes through sustainable means.

Millennials are twice as likely to simply throw unwanted clothes in the bin (39% of millennials versus 20% of boomers).

However, some millennials are finding new ways to give their old clothes a new lease of life; as many as 55% have passed on unwanted clothing to friends and/or family, a third (32%) have sold old clothes online, and one in ten (10%) has previously upcycled clothing (re-fashioned an old garment to make a new one).

The most popular reason for disposing of clothes is because they no longer fit, which 62% of Singaporeans consider grounds for throwing garments away. Other common reasons to throw clothes away are because they’re damaged (chosen by 57%) and because they have developed a fault (selected by 42% of respondents). 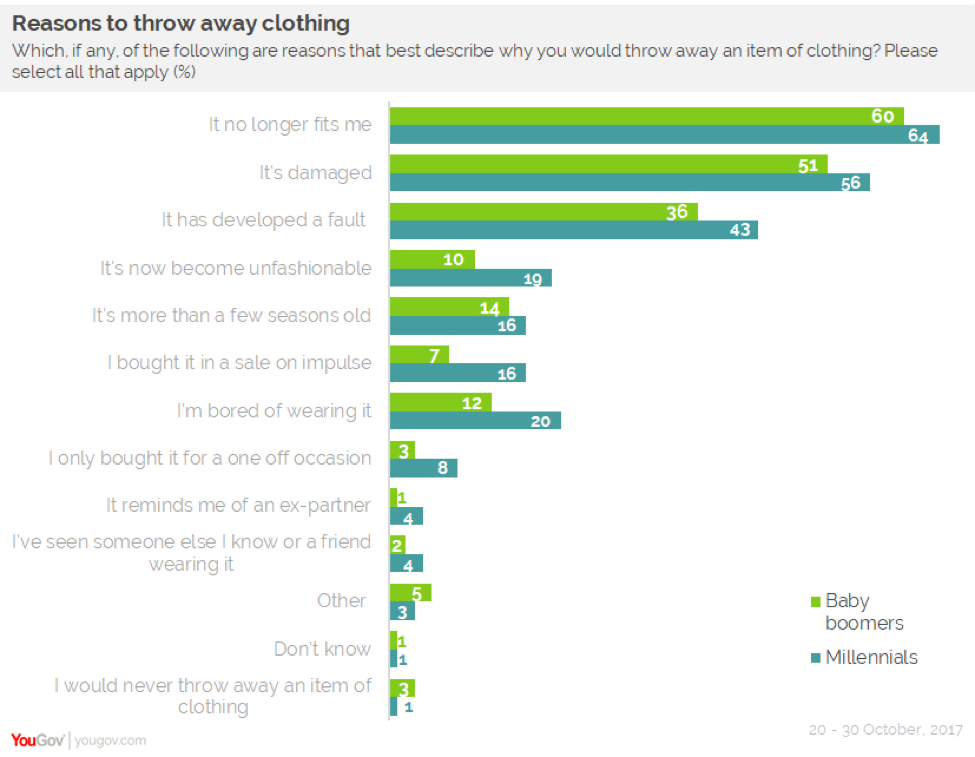 YouGov’s Head of Omnibus, Jake Gammon, comments. “Fast fashion brands have been keen to remove their unsustainable label. Yet despite various recycling initiatives by leading labels, this survey highlights just how many clothes go to waste each year in Singapore. Looking ahead to the future, there is a worrying trend among millennials; their propensity to dispose of clothing at a faster rate and using less sustainable means than older generations suggests that there is an uphill battle ahead for those keen to tackle this issue head on.”

However, Thais are the most likely to have thrown away more than three items of clothing in the past year that they have only worn once (17% have done so), whereas Chinese consumers are the least likely (8% have done so). On the other end of the scale, as many as 25% of Filipinos, 21% of Malaysians and 21%of Indonesians have not thrown away any items of clothing in the past year.

*Data was collected online by YouGov Omnibus between 20 and 30 October 2017 among 4,097 respondents in Singapore. Results are representative of the adult online population.