It hasn’t been ‘business as usual’ for the automotive industry in recent years. While we were shocked to learn about Volkswagen’s global emissions’ scandal in September 2015, in January 2016 we heard from another automotive manufacturer, Ford, and their decision to close all operations in Indonesia.

To what extent have these events affected perceptions of Ford and Volkswagen among Indonesian consumers? YouGov BrandIndex tells us what consumers care most about.

Looking at the Buzz scores of Volkswagen in Indonesia, it dropped from 8.0 to 0.7 points when the emissions’ scandal erupted in September 2015. However, its Buzz score recovered quickly and bounced back in just three months, and remained strong and positive throughout the following year.

However, Ford hasn’t been as fortunate. When Ford made its announcement in January 2016, its Buzz score dropped drastically from 15.9 to – 5.8 points in less than a month. And throughout 2016, although Ford’s Buzz score went up eventually, it still hasn’t fully recovered.

This suggests that Ford’s factory closure has a direct impact on the local economy and the labour market, leaving a more prolonged effect on consumers’ perception. It would indicate that consumers care more about brands’ activities in their own country and localised wrong-doings are harder to forgive than global scandals.

‘Buzz’ scores under YouGov BrandIndex measure the net of consumers’ positive and negative views on a brand within a particular sector. It is also a measure of consumers’ awareness of good or bad news; an advertising or a PR campaign; or a product launch taking place over certain period of time.

YouGov BrandIndex is the only daily consumer perception research service of brands. YouGov Brandindex launched in Indonesia in December 2014. We have been tracking over 540 brands in Indonesia on a continuous basis, enabling a more transparent understanding on how consumers perceive these brands.

Buzz scores of Ford and Volkswagen in Indonesia 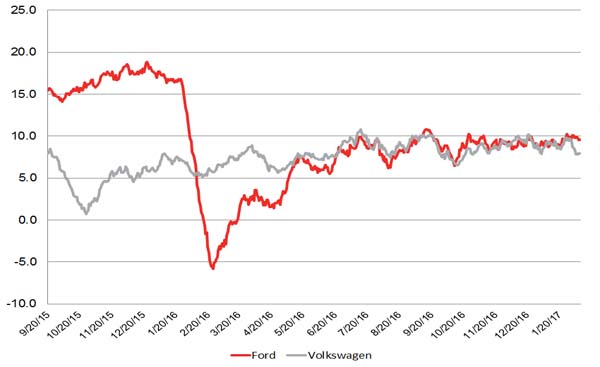